Posted on August 19, 2018 by patinkingsheath

Since I’ve had the second shoulder operation I’ve not, of course, been able to take Isis for a walk. I’ve not yet felt strong enough to take her out into the lane at the bottom of the garden either, so she’s having to make do with the garden.

She spends hours happily playing in the garden, dancing, hunting in the extensive undergrowth for old toys, tracking whoever has visited since the day before and tossing around whatever she’s found to play with.

I often wonder how long she would stay out if I didn’t fetch her in.

When I pop next door, it’s safe to leave her outside for a few minutes. My neighbours are away for a week and I am doing  daily drips, leaks and floods patrols.

The first few days are uneventful. No drips, leaks or floods, just a few dead wasps on the windowsill of E’s bedroom.

Then, one day, there are ten wasps dead on the windowsill and one still flying around but struggling. I pick him up and let him fly out of the window, collect the corpses and put them in a plant pot outside.

The following day there are several little black and yellow striped jerseys with dangly legs and droopy wings, dazed but alive, and many more who lie on the window sill on their backs, wings stiff and legs rigid.

As I let the survivors out of the window, I look over into my garden to check on Isis.

There she is with my smart blue hose pipe between her clenched teeth, all four legs seriously braced for tugging.

She heaves at the pipe which is firmly wedged in the undergrowth, brambles and teasels.

She scrambles backwards, increasing her purchase, then stiffens her legs again and drops her rear end close to the ground.

She reorganises her teeth for better grip.

I close the window and hobble off down the stairs as fast as I can safely go.

Once in the garden, I tap her head gently and, thankfully, she lets go of the hose pipe. She’d not let go if it was a toy so I assume that she knows it’s not hers. Or perhaps she smells the waves of frantic human I’m giving off.

I’m lucky, there are rows of little tooth marks but no breaks.

When I tell Polymath, she says, “Oh, dear little thing. She’d love a big snake like that. You must get her one.”

I wonder if anyone sells hose piping by the metre. Must check it out.

By the way, Isis stayed out in the garden for seven hours today before coming in and pointing out that it was dog’s tea time. 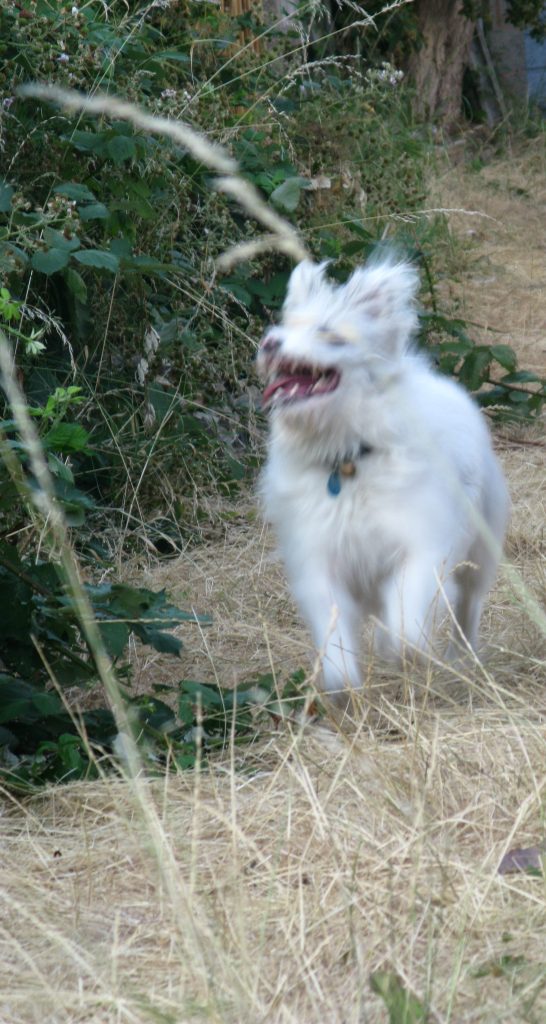 8 Responses to wasps and hoses