The flower meadow at Highbury, now in its third year, is thriving. Often I admire it, and wish that a chunk of it could be magically transported to my back garden.

My grass, which hasn’t been mowed for two years has grown to two or three feet tall. Now, with two working shoulders, I no longer have an excuse for procrastination.

And we still have the seemingly unsolvable problem of Isis versus grass. I have droned on about it for years, so here’s a very brief reminder. Isis loves to be outside, but when she’s let let loose on a lawn, the lawn rapidly degenerates into a dust bath or a quagmire, depending on the weather. Not an unusual scenario for dog owners, and a seemingly insoluble problem.

Isis has at least one good walk in the park each day, usually two, but sometimes she’s reluctant to go for a walk in the evening, yet keen to be outside. I allocated her about a quarter of the grass area, blocking off the rest to allow it to recover.

Two or three weeks ago, I notice that although she has been dancing relentlessly on her meagre strip of grass, the grass is still there.

I move the roll of green plastic covered fencing about two thirds of the way down the garden. It’s wonderful, this flimsy, bendy fencing. Isis, who can leap or scramble effortlessly over a solid barrier, is spooked by this fencing, which gives when she leans against it. It’s been there for three weeks now and she’s not breached it.

Now she has a much larger area of long grass to play in. At first she is a little suspicious,

but she soon spreads her wings. She even plays outside with her snakes, instead of bringing them back to her bed indoors.

I keep a keen eye on the grass. Yes, it’s getting flatter, but there are no bald patches, none of it appears to have been uprooted. 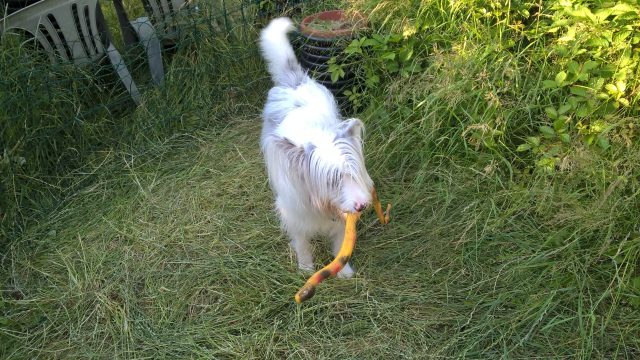 The past few weeks have been hot and dry. The stamped down grass turns yellow.

But it’s still there, with its roots firmly embedded in the ground. And as yet there are no bald patches.

I listen to conservationists urging us all to create wild-life friendly spaces in our gardens, I see how the Highbury meadow withstands the constant onslaught of playful dogs, and I  begin to wonder whether there might be a solution to our problem.

Then, the weather changes. A steady, soaking drizzle descends. Isis, of course, is thrilled. I watch her dancing in the rain, and don’t have the heart to bring her in. Instead, I brace myself. She’ll be filthy. I gather together some dog towels.

Twenty minutes later, I glance outside again. She twirls, kicking up her back feet, and I can’t believe what I see: pink pads. Well, she’s not been out for long. Give her time.

She plays in the garden, in the rain, for an hour, and when I bring her in, she is clean. Yes, clean! Her white is white, her grey is grey, her legs and feet, even her claws are pristine. There’s not a spot of mud to be seen.

Right, I decide. I’ll not cut the grass until the end of autumn, then I’ll leave it to grow again through spring and summer.

Recently, I re-seeded the patch at the end of the garden – hope springs eternal, as they say. Isis demolished every blade two years ago, so I’ll keep it closed off for a couple of years. Hopefully, it’ll grow, and Isis will have her own little meadow to play in.

It’ll never look like a slice of Highbury, but I can sling in a packet or two of wildflower seeds. And I’ll only have to cut it once a year.

3 Responses to the ‘garden’