Isis and the tunnel

On Wednesday afternoon, I peg out about a metre and a half of the tunnel. The curious Isis is soon sniffing around it. Shadows? Afraid? What are you talking about? Within thirty minutes she ventures inside. 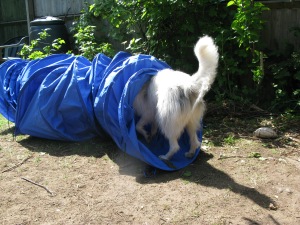 Then she settles down. Just in case, she leaves her beautiful tail outside.

She seems to like her tunnel and has little snoozes in it during the afternoon. But things are never straightforward with Isis. She finds the outside interesting too. The tunnel is nice and springy. She bites a hole in it. Sigh.

Tomorrow, I decide, I will have to find a way of protecting the outside of the tunnel. There’s no way she’s about to lose interest in destroying it as this is a very enjoyable activity.

But she settles down in her tunnel as it begins to get dark. She looks very sweet. I took this photo at about ten o’clock before fetching her in for the night. 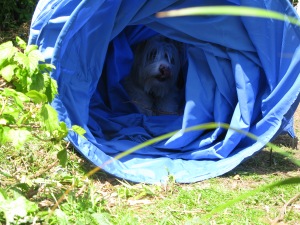 On Thursday, I begin dismantling the shed which has been in the garden for over ten years. I never finished erecting it and feel guilty every time I look at it. But at last it might serve a useful purpose. It’s aluminium and could make a kind of case for the tunnel.

I set to. After much huffing and puffing and even more cursing, I’ve taken off two corners of the shed. I place these on the grass so that one panel lies flat and the other stands up at right angles to it. I line the two corners up end to end so they form a topless tube and pop the tunnel inside.

But soon she discovers that if she bites through the cords with which I’ve tethered the tunnel, she can tug either end of it out and extend it beyond its aluminium shell. Whoopee! It’s springy and seems to have a life of its own once she’s freed it. It springs up at her and she pounces on it.

I rescue the tunnel before she shreds it. Back to the drawing board!

This entry was posted in Uncategorized. Bookmark the permalink.

2 Responses to Isis and the tunnel