Posted on June 8, 2015 by patinkingsheath

Yesterday evening I set forth once again on attempting to Isis proof the tunnel enclosure. Attracted by the mesh rolls, she dances helpfully on them as I work.

By early evening, after much seam sewing with thin wire, the carcass for the tunnel is ready. While Isis has her post tea rest (enforced, not voluntary) I take advantage of her absence, retrieve the tunnel from the garage where it has been recuperating since her last assault on it and stuff it into the carcass. Then I fold back the mesh about six centimetres at both ends. 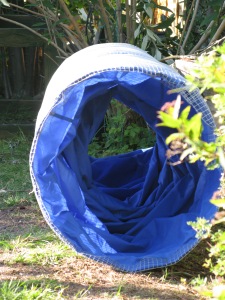 Hmm, that should do it. She’ll not be able to extract the tunnel now. Satisfied glow.

I watch her intently from the window for half an hour while she sniffs all round the structure. She tries pulling the tunnel out but fails. She consoles herself by rolling it round the ex-lawn. I smile and make a phone call.

I am boasting to Polymath about my success and get up to have another look out of the window.  “So now she can’t”, I begin but trail off in utter disbelief  ……… 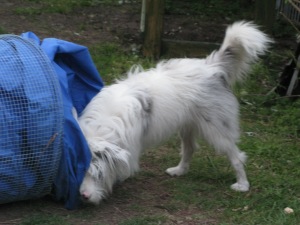 “Oh yes she bloody well can”, I shriek. Loud guffaws down the phone.

She has drawn out the tunnel at both ends. How can those little teeth be so strong?

Meanly, I stuff the tunnel in again. This time I fold the mesh back about twenty centimetres at each end.

Yes! By dog’s bed time she has still not managed to extrude the tunnel.

This morning some good news. Isis has been taking her Clomicalm for thirteen days now so off we go to RSPCA Newbrook Farm for a check-up.

It’s too soon to expect any effects from the medication, but I explain how well the behaviour modification seems to be going. I am hoping that the Clomicalm might reduce her intense anxiety about bright and changing light as that would definitely enhance her quality of life.

The vet is very pleased with us. I ask her if she will take a look at the back left paw which is the one which Isis bites. After a very careful examination, the vet finds no infection and no scarring. She says she would not have known about the biting if she hadn’t been told. The only evidence of the attacks is saliva stains. I am very, very pleased. I had worried that she would end up with a deformed paw.

The medication doesn’t work on every dog. If it is going to be effective, there should be positive signs after two months. It is suggested that if I think it is helping her, it would be advisable for Isis to continue with it for up to six months. On the other hand, if she does brilliantly it might be sensible to reduce the dosage gradually and see what happens.

P.S. Isis behaved impeccably throughout her visit and her ears were greatly admired.

Isis came from the Aeza* cat and dog rescue and adoption centre in Aljezur, Portugal. For information about the centre’s work and/or adopting an animal from the centre, contact kerry@aeza.org or  www.dogwatchuk.com