Isis is almost equal to me in her ability to generate rubbish. This week has felt like a non-stop and losing battle against STUFF.

It seems that every time I glance out of the window, she is trotting down the garden triumphantly bearing yet another unsuitable object: a large aluminum pedal bin, panels from the shed, a garden chair, a disembowelled plant pot, the waving roots of some unfortunate plant.

It has been  an exasperating week during which I continuously rearrange the deckchairs on the sinking Titanic.

The side passage is crammed with things which require action. There is sheet asbestos (out of Isis’s reach, I hasten to add) which has to be detached from the old wood it’s nailed to before I contact the council to discuss its disposal. There is an old black rubber dustbin which might come in useful. There are two remaining fence panels which need to be put up but that can’t be done until I remove the old panels. These, in their turn, are covered by rampant growths of japonica, winter jasmine and ivy which have to be dealt with first.

Two garden tables are stacked with stuff which I have confiscated from Hairy One. And the aluminium sheets from the shed which I dismantled some months ago are now reposing on the ‘vegetable garden’ – ironical titter. The entrance to this space is blocked by a huge heap of stuff from the shed. This heap is the only obstacle preventing Isis from getting into the space so can’t be removed until the gap is fenced off.

As l dozily flit from tidy up to tidy up, hiding objects rescued from the jaws of Hairy One, it’s only a matter of time, sometimes merely a few minutes, before she retrieves them.

The garage is the answer. But has to be sorted. And it’s a formidable task. 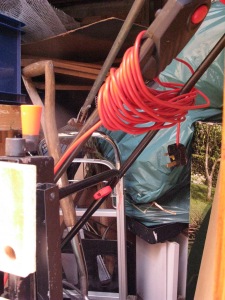 The next layer up.

On Friday, after months of procrastination, I force myself to begin. An hour a day, I tell myself, just an hour a day.

This entry was posted in deaf/blind dog plays and tagged running to stand still. Bookmark the permalink.