Not an auspicious beginning to the day. The freezer, which has been on the blink for a week or so, finally has to be switched off. The washing machine smells like a stagnant pond on a very hot day in August. And Isis pees on the mat. It’s my fault, not hers. I kept her waiting far too long.

When we return from the park I tip soda crystals into the washing machine and set it off on ninety. Then I cook a large amount of fish from the freezer for Isis. Now the house smells even more disgusting. This is unfortunate as my friend K. is coming round in the afternoon. I pour some strong smelling oil into a little oil burner, hoping it might distract us from the stench. Well, it has some effect: K. identifies the smell as dried fish and this, though not the most pleasant smell in the world, is a damn sight better than poached fish.

Yesterday I was tired having not slept much the night before. After returning from food shopping – not the most invigorating of pastimes – I felt even more weary. I didn’t have the heart to keep Isis out of the garden even though it had been drizzling on and off all morning. I’d bring her in if the rain started again, I decided. I had something to eat. And fell asleep ……………………………….

Suddenly, Isis comes into the room. She stands still,  staring soulfully at me. She is absolutely filthy, spattered with mud from nose to tail. It is raining heavily and obviously has been for some time. The naked earth is pitted with Isis holes which are now overflowing with liquid mud.

Oh my god. I look at her. She looks at me. She knows I have neglected her and gives one foreleg a pathetic little lick.

What the hell am I going to do with her? I’ve never bathed her, believing that she would be traumatised. And it’s not been necessary. The dirt usually just comes off when I brush her. But this bedraggled mud heap is something else.

I think I’ll hose her down gently in the garden. She likes rain. But how ever hard I try, she skips off out of reach.

I put on my waterproof walking jacket, take a deep breath, pick her up and put her in the double sinks, front legs in one, back legs in the other. She is not impressed. She growls in protest and tries to climb out. I wash, shampoo and rinse her. She doesn’t threaten to bite me or to bite herself.

She doesn’t even protest as I soak up all the water I can with a towel. She is put down on the futon – how useful this futon is; what would we do without it? She tolerates a little more towel patting, then lets me know enough is enough and settles down to snooze.

She doesn’t appear to be traumatised. Just surprised and a little cross. Later, she goes through her usual routines as though nothing has happened. That night she does have more bad dreams that usual though.

She looks beautiful. A photo is called for. 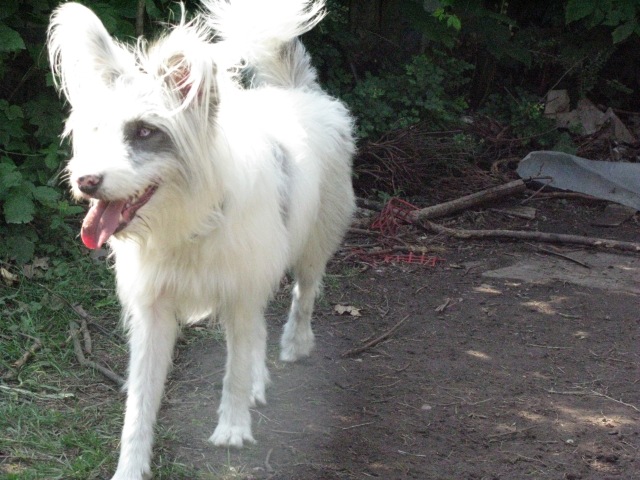 This entry was posted in deaf/blind dog plays and tagged deaf blind dog's first bath, Isis has a bath. Bookmark the permalink.