Posted on August 12, 2015 by patinkingsheath

It’s hard to believe that in seventeen days Isis will have been here for a year. I’ve just re-read my first blog entry. It was August 19th 2014 and I was busy listing all the jobs I needed to tackle before she arrived in Birmingham. This is my to-do list for the garden:

uproot all of the brambles; prune low, overhanging branches; remove all sharp edges; put padding round unmovable objects; recycle all recyclables;  remove any precariously balanced items which could fall on an inquisitive visually impaired dog; take all rubbish to Lifford tip.

All this I did religiously. No idea had I then that my new little podengo mix would have had no problem with uprooting the brambles, would soon be pruning low, overhanging branches with relish and would regularly remove the padding I wrapped round the whirligig, the edges and arms of the garden seat in order to protect her. Neither could I have guessed that she would be an expert recycler. Nor that she would seek out sharp objects to play with no matter how carefully they had been hidden away. That she would spend hours transforming stable objects into precarious heaps. That she would create mounds of rubbish from what had been useful or decorative items: bags, clothes, bed linen, fences, posts, sheets of plastic, her new tunnel, shrubs, flowers, to name but a few. 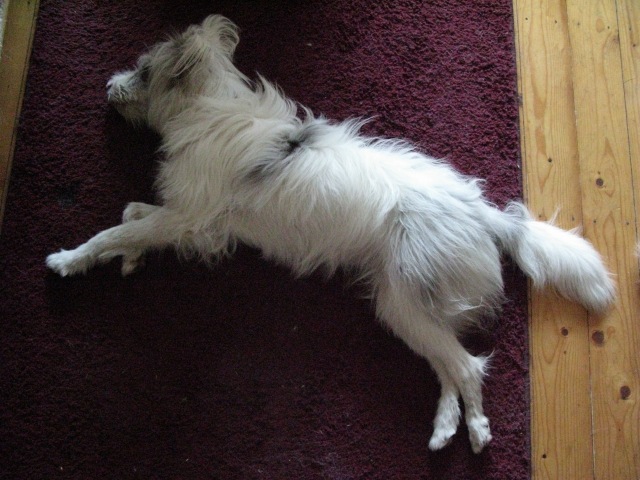 Or, that despite all this, she could look so sweet.

This entry was posted in dear little Isis and tagged my deaf/blind dog. Bookmark the permalink.

2 Responses to looking back