what can she hear?

Posted on August 19, 2015 by patinkingsheath

Tuesday is shopping day. In the Co-op there are rubber newspapers for dogs. I can’t resist them and buy one for Isis. This is the first toy  I have bought her. When, a few weeks ago, she began to play with sissy things like toys as an alternative to wire netting and sheets of metal, she began with Ellie’s (my previous dog’s) toys. Now these are all much the worse for wear and the once squeaky ones desqueaked.

It is still far from clear to me exactly what Isis is able to hear. She can definitely hear loud barking from several metres away. This frightens her and she wants to run away. But the direction in which she runs is quite arbitrary: she is clearly uncertain of where the barking is coming from.

Experiments with a very loud clicker and a very piercing dog whistle suggest that she is able to hear these sounds only when they are very close to her – no more than a couple of metres away. Again, she appears to be unsure of the direction from which the sounds are coming.

She was definitely very frightened during a storm a while ago but whether it was the violent  flashes of lightning or the crashes of the thunder or, indeed, the vibrations she felt which scared her is impossible to guess.

Generally, she seems to enjoy ordinary toys just as much as squeaky ones. When I presented her with the toy newspaper, she ignored it, of course and ran off. But when I left it in the garden, within minutes she found it.

Wow! She was very, very pleased with it and raced round and round the whirligig in big circles squeaking and squeaking it. She played with it for hours, putting it down every now and then while she dashed off to another part of the garden and then returning soon after to pick it up and squeak it again. 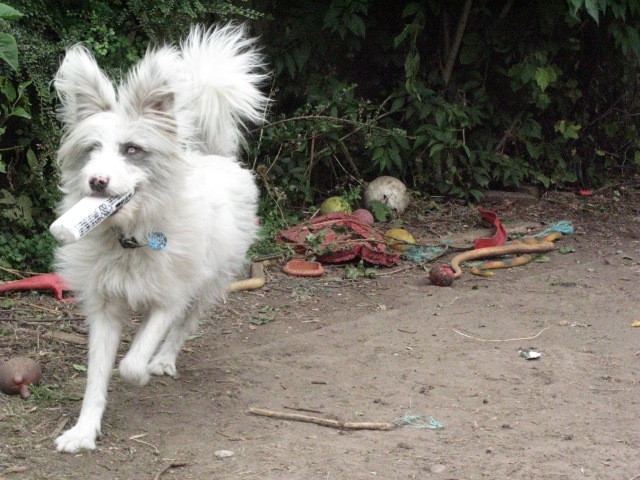 I was interested to note that she played with it almost obsessively until it ceased to squeak. Then she put it in her toy cache and abandoned it. I have noticed that the other ex-squeaky toys are rarely played with now and am sure that she does hear the noises they make while she is chomping on them.

Does anyone know of any squeaky things which last?

6 Responses to what can she hear?