Isis loves to chew sticks. Her favourites are thick, tasty ones which crumble into fat flakes. These flakes can be held in the mouth and shaken around as one runs. Quite a lot get swallowed, of course.

Rufus and Nancy chew up and swallow sticks. Then they up-chuck them in Bev’s car or on the freshly cleaned rug.

So far, Isis doesn’t throw up her sticks; nevertheless, observing the increasing ratio of eliminated dog food to bits of stick, I am horrified. What a negligent owner. I shudder to think, yet again, of all the horrible things which might happen to a stick chewing dog.

The stick chewing must stop, I decide.

This, like most dog-related decisions, is easier said than done.

Communicating ‘NO’ is, of course out of the question. It doesn’t even work on the obedient Rufus and  Nancy let alone the recalcitrant Isis.

Unfortunately, she now ignores toys like squeaky dumbbells and hamburgers with which she once joyfully played. Last week, finding myself very close to Pets at Home, I  call in and, without a huge amount of optimism, rummage through all the stuff which Isis might possibly  be persuaded to play with. Most of the toys would not interest her in the slightest but, eventually, I select something which looks like a stick. Not because I think that she will be fooled but because the blurb informs me that it ‘contains real wood’. It’s a Dogwood Stick made by Petstages, is ‘great for dogs that love to chew’ and has a ‘natural wood smell that dogs love’.

Even though it costs £7.00, I put aside my misgivings and buy it. At the same time I buy a new rubber ball on a string. She’ll not play with it at present but will warm to it once she can use the garden again.

The same evening I casually toss the Dogwood Stick (patented) onto the grass around where Isis is playing. And again. And again ad infinitum.

Isis sniffs it in passing but does not find it tempting. In fact she shows no interest in it at all. Throughout the following week I attempt in vain to seduce her but she doesn’t love the natural wood smell, doesn’t give a damn that it’s ‘safer than real sticks’, isn’t impressed that it’s non-toxic.

Every time that Hairy One grabs a stick I wait until she lies down to crunch on it and then I pounce. Generally it takes several minutes to dislodge the stick from her mouth. I don’t enjoy the tussle, but almost always I manage to remove it.

In the meantime, I lope around our play space with one eye on Isis and the other on the grass.

I have become an inveterate stick gatherer. 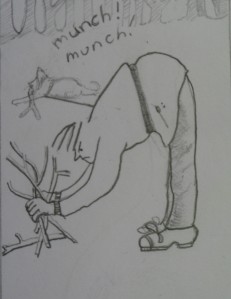