It’s getting very cramped on the futon. We need to sort out our priorities, I inform Isis. I am bigger than she is and therefore require more space.

Other dogs took the hint. They knew that they were just keeping my spot warm and when I sat down they moved up good-naturedly. The only comment they ever made was a stretchy, yawny little grumble.

Not Isis. She has two modes of response. If she is fully awake she gets up and begins her futon dance routine. This consists of trampolining on her back legs to the accompaniment of “Ump, ump, ump.” Often, a variation is introduced: her teeth are incorporated into the performance and she goes, “Ump, clack, ump, clack, ump”. This is followed by noisy “Er-rer-rer” pecking motions aimed at the edge of the futon. Frequently, during her wild bouncing, I receive a pawful of sharp claws, usually on my shins or behind my toes.

If I’ve arrived with a meal she continues until I’ve finished it or moved away to avoid puncturing the roof of my mouth with my fork.

If she is very tired, on the verge of sleep or asleep and I accidentally touch a hair of her foot, tail or whatever other bit of dog anatomy she has left lying around, she has a huge, snarly temper tantrum. These, thankfully, are much less frequent nowadays.

I resolve to make a serious effort to reduce the scale of our futon battles by marking out my territory. No, I’ll not pee on the cover – there are limits. I’ll do this instead ………….. 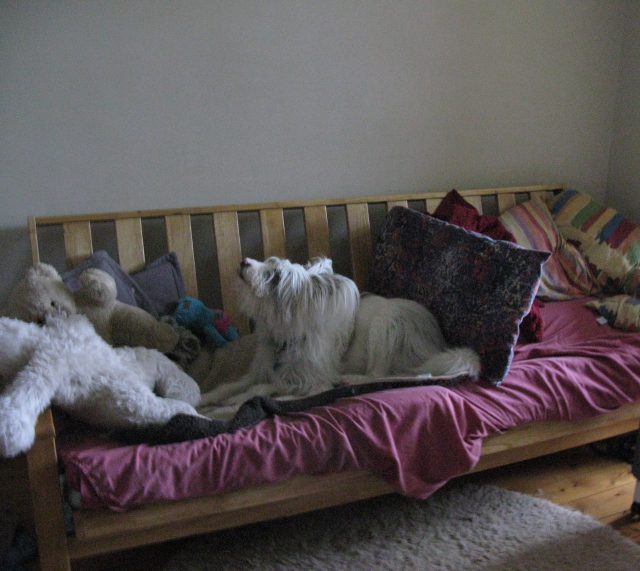 Yes, she does have more space than I do, but at least it’s a start. And once she’s asleep, hopefully I can sneak my legs around the pillow into the spare space between Hairy One and the futon’s outer edge.

So far, so good. Since poor Isis is unable to see what I have done, she has, with only one exception, jumped up and settled on her side of our nest. And I have found it easier to avoid touching her with a straying finger or toe.

This entry was posted in Isis is no angel, sleeping arrangements and tagged blind dog accommodated, containing Isis, Isis has to share, Isis wars. Bookmark the permalink.