and the gas man calls again

Posted on December 4, 2016 by patinkingsheath 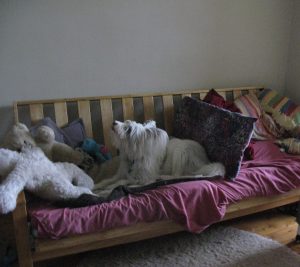 Well, Friday was a bit nerve-wracking. An early start – which is never my favourite thing. I get up at seven-thirty to make sure that Isis has a couple of hours in Kings Heath Park before I leave her to go into town to meet A.

Since B., the gas man, is coming any time after three, I leave plenty of time to get back home. Unfortunately, I forget what it’s like when the primary schools finish for the day, and I sit fretting on the bus which takes about half an hour to get from Moseley and through Kings Heath. But my phone doesn’t ring, so I’m able to take Isis for a thirty minute street ‘sniff and pee’ walk.

B. arrives at 4.40 and sets to in the kitchen. Isis utters her usual warning barks when she smells him enter the house, then I fetch my Kindle and we both settle down on the futon.

All is fine for the first hour or so. I read. Isis snoozes.

Then the trouble starts. Isis jumps down and begins scratching at the door. Damn. “Stoppit!”, I yell. I don’t know why I do this, since she can’t hear me, but I do. She carries on, of course. Clearly, she doesn’t need to go out since we’ve not long come in.

The scratching, which has now assumed a steady rhythm, becomes increasingly irritating.

I get up and tap her sharply several times with my index finger. This means that she’s doing something I don’t like and she should stop. She does. I sit back down and pick up the Kindle again.

“Grrrrrrrrrr,” I reply, leaping up once more. I pick up the recalcitrant one and put her gently on the futon. I suggest that she settles down and goes back to sleep.

She does. For twenty minutes. After which there is a loud “phlunk” as she descends once more, and, returning to the door, begins again.

I feel myself tensing all over. “Isis!” Another pointless admonition.

Aaaaaaaaaaaaaaaaargh! Yikes! (Yes, I used to be an avid reader of the Beano. When I was working, I collected it from the newsagents every Friday along with the Times Educational Supplement.)

I set aside my reading once more and lift up the fluffy tormentor. I plonk her back on the futon.

B. has told me that the job will take three hours. Time is passing very, very slowly.

Even though I armed myself with a coffee and a container of spicy Christmas biscuits before retiring to the back room, I’m feeling hungry. And, of course, increasingly irritable.

Usually, I would just retire to the other room and leave Isis to settle herself but I am certain that she’ll not stop scratching and rattling the door and will drive both B. and me crazy.

It’s not like her to carry on and on  like this. Normally, once someone new has come into the house, after her initial watch dog performance, she’ll settle.

Not this evening. Whatever is upsetting her is clearly going to continue to to upset her until. B. leaves.

Sure enough, she resumes her demolition act on the door every twenty minutes or so and each time she does, I get up and return her to the futon. Then she settles for another twenty minutes or and off we go again.

It’s one of the longest three hours I can remember.

At last the job’s done and, although B. is disappointed that the new heat exchanger has not improved the performance of the boiler as he thought it might, the radiators are much hotter than they have been for weeks. He will return next Wednesday to reset the boiler when a power flush has been done.

The power flush is an all day job. It takes about seven hours.

What the hell am I going to do with Isis for seven hours? Three hours passed slowly enough. Any longer doesn’t bear thinking about.

It’s not as though she’d be a welcome guest at any friend’s house. Nor can I leave her at home. We’ll have to stay in the park all day, I fantasize.

At least I can eat now. I do. Isis is still a little restless but eventually settles down and sleeps.

We are both worn out and go to bed ridiculously early.

I read. She seems irritable and restless but eventually we both sleep.

At five in the morning, I wake and check the clock. Suddenly, a thought strikes me – heaven knows why.

Isis always has her evening meal at around six o’clock ……. and that’s when the scritching and door pounding began.

I forgot to feed her last night.