a week in the life of a hairy dog

Posted on February 12, 2017 by patinkingsheath

One way or the other, a very damp, drippy week.

On the first day of the week Isis enjoys a lovely long romp in the privet enclosed area. Again, the only fly in the ointment is the deep ditch full of black slime. For most of the time, I manage to head her off, but, unfortunately, Ji. and I both take our eyes off her for a few seconds. When we next look, she has acquired four, black knee-socks. Needless to say, she does not enjoy being washed afterwards.

From Monday to Thursday, the sky remains grey and it drizzles continuously. Isis is unconcerned. She’s having a wonderful time. She enjoys increasingly long off-lead prances in Kings Heath Park. And, wonder of wonders, day after day, not only drizzle but flurries of white stuff fall on her twitchy nose. Oh joy! One dog’s  idea of heaven.

She continues to have a rollicking time on Thursday. But I don’t. Just as we are about to head for the car park, I greet a favourite dog. As I bend down, he jumps up. Smack! Red hot pain shoots through my nose. I think I have a nose bleed. And my stomach feels as though it’s been kicked.

Fortunately, Je. and Wilda emerge from the wooded area. Wilda behaves impeccably. Isis doesn’t. She races around on the end of her extended lead. She hasn’t a care in the world.

Je. informs me that I don’t have a bleed but a deep gash on the bridge of my nose. I think I must be looking a bit strange, as she insists the gash must be attended to. We call at the Park Ranger’s Office and I am soon on my way with a large dark blue plaster across my nose. No-one comments or stares, of course. We’re British, after all. I don’t feel quite myself, though, and am grateful that Je. was around.

Then comes Friday. The sun is out for a day and we are given a taste of what the end of the drizzly winter might be like. It is still very cold but our dog-walking hearts rise, and the mud under foot doesn’t seem quite so claggy. Isis doesn’t care if it is claggy or not. She dances her way through another happy day. 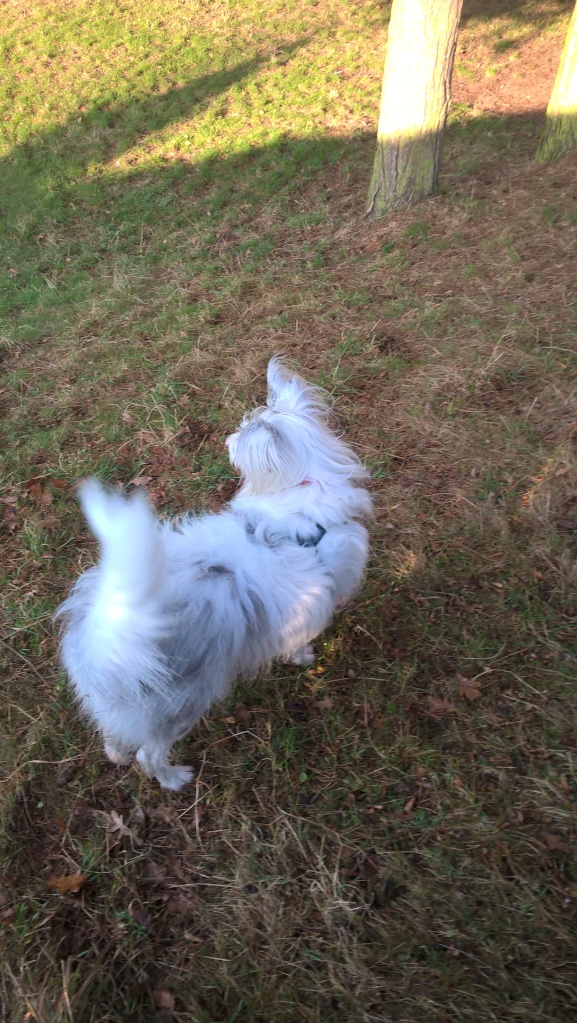 The sun was teasing us. Saturday arrives and it’s freezing cold and wet. And grey. Again.

In the morning, of course, we sally forth into the murk. To Highbury, this time.

We soon meet Li. with Dougie and Fergie. While the rest of us greet other passing dogs, Isis dances by the privet. Then we’re off round the park.

We walk back along the stream. Isis, who needs a drink, is walking on her extended lead close to the edge of the bank. Suddenly, she steps onto an overhanging clump of grass. Splosh! She’s standing in the deep, icy water of the stream. For a few seconds she is in shock. Her little pink mouth is open wide and her top coat floats around her like a hairy white circular skirt.

I haul the poor little soul out by her harness and give her reassuring pats. Li. and I coo sympathetically. But Hairy One’s fine. After a quick shake, her beautiful tail pops back up and away she shoots. She no longer wants a drink, and leaps off dancing.

Today it’s the first day of next week, as it were, and it’s my turn for a tumble.

It’s Hairy One’s fault, of course. She’s been dancing happily on the nice, clean, mossy grass below the beech wood. Soon, little Dougie discovers us and we are joined by Fergie and Li., Then Isis dances off into the quagmire which was once a path into the woods. I, of course, have to set off in pursuit of the errant animal. Unhelpful as ever, Isis puts on a spurt and by the time I manage to catch her we are both up to our ankles in a thick, black bog.

Looking back at the sea of mud we’ve just come through, I, like MacBeth, decide that I am

Not a wise decision. Now the mud is even deeper. Soon, with a horrible, squelchy gurgle, my left wellington boot sinks into the muck. My foot jerks out of the boot and lands half a metre beyond it. As I attempt to manoeuvre my foot back into the boot, my hat falls down over my eyes. I make a grab for it but manage to drop it. ****! ****! ****!

Now I have one foot and both hands in the mud, and one filthily socked foot up in the air. This, I muse, is just the moment for Isis to leap forward and drag me along face down. But, fair play to her, she doesn’t. Perhaps she is feeling generous. Or maybe she just senses that something’s wrong. Whichever, she stands quite still until Li. arrives, glugging through the mud, and holds me upright by my elbow while foot and boot are reunited. A real act of friendship Li.

Dougie and Fergie are not about to be left out of the adventure, and soon all five of us are up to our ankles in mud. We all squelch forward towards terra firma.

Later, unkindly, I put Isis into a clean pool and her black leggings instantly fall off. She doesn’t hold it against me. As we know, she is a brave and forgiving little dog.