the birds, the bees, and two kisses

It’s cold when we emerge from the car, very different from last weekend. I wish I’d brought a scarf and woollen gloves along.

While we’re spiralling from top to bottom of the pine avenue, the sun pops out. Now I’m sweating into my lambswool polo neck and unzipping my heavy waterproof jacket.

After half an hour among the pines, I walk Isis over to the edge of the wood and drape  myself over the bench. Isis, uncharacteristically obliging, potters happily in the vicinity.

The bench is made of metal and a rigid composite. It’s very hard, so I always lead Isis up to it and gently push her against it to remind her exactly where it is. In the past she has caught her face on it. She rarely cries, but if she knocks herself hard, she shakes herself very vigorously, so you know it hurts.

We walk along the pond-side path. On Thursday Liz told us that the Canada goose pair had begun sitting on their nest on the little island in the pond. Sure enough, one is safely ensconced on the nest, the other on guard in the water a few feet away. The latter glides towards us, glaring  meaningfully at Isis.

Every year a pair of these birds nests on the little island. They’re brilliant parents and rarely lose a chick. Last year the pair hatched six chicks and all of them grew to adulthood.

There’s always the excitement of waiting for them to hatch. One year a friend and I were lucky enough to see them emerge from their nest for the first time and to watch their parents introducing them to the pond.

We walk onto the main field where we’re met by the enthusiastic Dougie and Fergie.

A honey bee, tempted from its hive by the sudden warmth, is sunning itself on the back of L.’s parka. I slide a finger under its feet and it walks onto my hand. When I lift up my hand, the bee flies off towards the trees.

Soon one of a friendly, very boisterous pair of young boxers rushes up. He dashes to Isis, greeting her enthusiastically. Hairy One is frightened. Her tail drops, her ears flatten, and  she begins to back away. As soon as the boxer moves on, dear little Dougie hastens up to Isis and gently nuzzles her cheek.

L. and the poodles have already walked along the new woodland paths, but they’re happy to walk them again in the opposite direction. We stroll up alongside the Community Orchard, and L. suggests we let Isis choose which paths to take and just follow her. Sure enough, Isis trots confidently ahead. Each time she reaches a fork, she sniffs around carefully before deciding which path to take.

Bingo! Without any assistance, she reaches her favourite grassy mound and begins to dance on it. 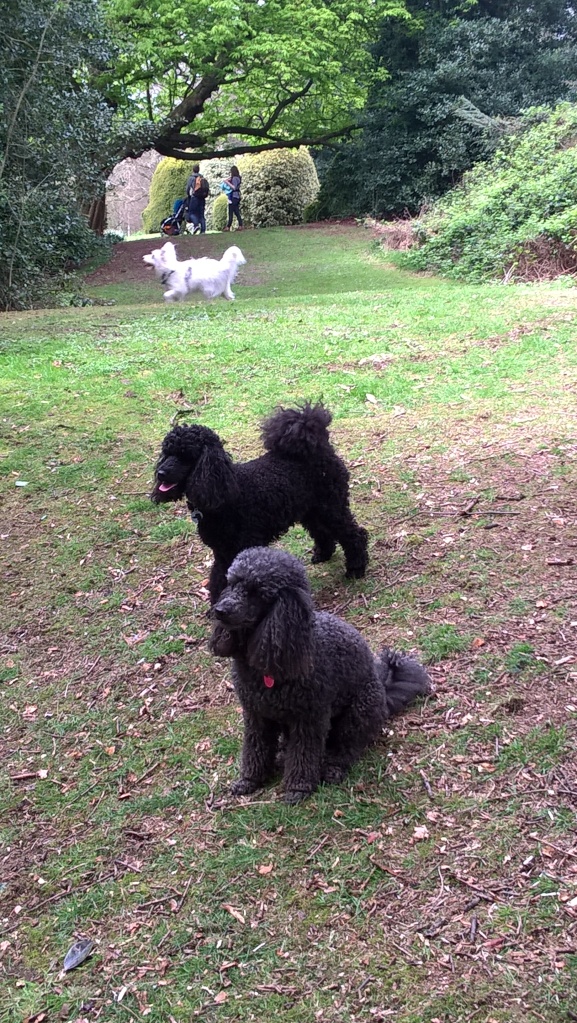 She recognises the mound long before I do. This is not the greatest of compliments, as I have absolutely no sense of direction. (I recall that, long ago, when I told a boyfriend that I’d decided to learn to drive, he rudely remarked,

“Oh god, no! Well, at least you’ll be able to get lost far more quickly than you can now.”)

Anyway, L. and I are very impressed and tell her what a very clever little dog she is.

L. says that she stood on the mound for a long time the day before, just marvelling at all the birds she could hear. Sure enough, there is birdsong all around us: tweets and chirps and whistles. A blackbird is warning someone off his territory, a robin is singing contentedly; we hear the piercing squawk of a jay, and numerous  birds which we can’t identify are racketing away in the shrubs and trees around us.

L. tells me later that the guy who lives in the park keeper’s house walks his beautiful  German Shepherd around the park very early every morning and regularly sees badgers and deer: Muntjac, I presume, as Highbury is a comparatively small park.

Wow! Amazing. Isis and I will definitely make a dawn visit.

When we walk under the archway and into the walled garden, we hear the screech of the parakeets, several of which have survived here for several years now. L. manages to catch sight of two of them perched on a high branch, but I only get a glimpse of one as it flies off.

I think that Isis is beginning to feel that she’s part of a little pack when we’re with L., Dougie and Fergie,

Today, in the landscaped area, she plays close by for about twenty minutes before coming over to check us out. She sniffs both humans. When I bend down to make a fuss of her, she lifts her head and gives my nose a lick. A very rare gift.

It’s been a delightful afternoon.

2 Responses to the birds, the bees, and two kisses