Posted on May 7, 2017 by patinkingsheath

Saturday and off we go to Highbury Park. It’s dull and drizzly with a cold, sharp breeze. No bright sun or heavy shadows. Perfect for Isis.

Soon after we arrive, we bump into S. with Teddy and Casey. Then along comes L. with Dougie and Fergie. We make our way up past the Community Orchard towards the woodland path. 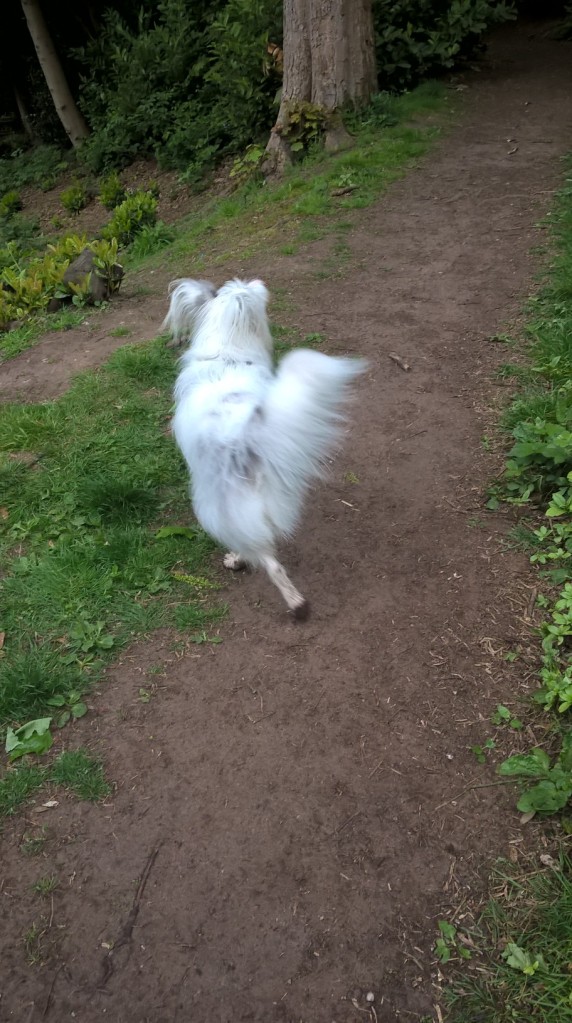 She soon decides on her path. As we walk, she mingles with the other dogs quite happily. She knows them all well and doesn’t flinch when they brush past her. They, in turn, are very tolerant of her odd behaviour. With the exception of very young puppies, dogs who know her just seem to accept that she is different. None of them growl when she walks into them, they just turn their heads smartly, see that it’s her and carry on with their doggy pursuits.

Isis stops so frequently to investigate alluring scents that Fergie’s in the lead by the time  the little pack sets off up the almost vertical bank which leads up to the old ‘lookout post’. Isis is now the last in the line. Without hesitation, she climbs up after them.

When they’ve passed the post, the others descend again to the lower track while Isis carries on along the higher path. I stay up there too, of course, to keep an eye on her.

Soon, I see her turn off the path to scramble down to the lower level again, but lose sight of her when she vanishes into the trees.

I am hurrying after her when L and S call up to me that Isis has rejoined them. Apparently, I’ve missed a brilliant photo opportunity: Isis was happily standing in the middle of the pack with the other four milling around her.

We walk back into the main area of the park, pausing on the expanse of grass between the beech wood and the pond. Isis is very familiar with this area, and wanders off on her own to check what’s going on in the undergrowth at the edge of the wood. The other dogs think it would be fun to race along the length of the pond and annoy the ducks. We call them away,and they race around enjoying manic chasing games.

It’s only six months since Casey and Teddy left their Serbian rescue centre, and less than a year since poodle Fergie (the grey one) joined poodle Dougie in his new home. It’s a joy to watch the four little re-homed dogs belting around without a care in the world.

When they’re exhausted they stop for treats. It’s time to go home, and I am about to walk up to retrieve Isis when I see that she has turned to face us.

I watch her, enchanted, as she sniffs her way towards me. She walks down the slope slowly and very deliberately, her head moving from side to side as she tries to locate me.

She arrives at my side. Clever little dog.

I pat her and put her on her lead. She wags her tail and we all move off.

We remind one another of the time, not so long ago, when she was frightened if another dog approached her, and terrified if one touched her.

Today, not only has she been off lead for virtually all of her time in the park, she has also become part of the pack.