Well, and how is Isis coping with her nightly banishment downstairs? I guess the answer is ‘much better than sentimental human imagined’.

Since the first night, she has not been shut in so there’s been no scratching at the door.

The following night and the one after that, she woofs a couple of times to draw my attention to the fact that she’s been left downstairs.

Since then, we follow a new bedtime routine. Isis pops into the garden on her own.  (She’s a brave girl now, but not so brave that she wishes to stay out on her own aprés pee.)

While she’s attending to her doggie affairs, I hide eight little treats in different places in her new bedroom, i.e. the back room downstairs.

Duty done, she hastily pops in through the back door, pink spotty nose twitching in anticipation, and shoots into the back room to hunt for her treats. As you may imagine, it doesn’t take her long to find and eat them.

Treats scoffed, she settles down on the futon.

There she remains until she smells Human drifting sneakily off to bed. By the time Human reaches the staircase, Isis is already emerging from the back room. By the time Human accesses the first stair and replaces the gate, a sad little nose is snuffling at the other side of it.

Sometimes, when Human/rat gets half way up the stairs and looks back, poor Hairy One has admitted defeat.

Sometimes, when Human/rat peers over the banister twenty or thirty minutes later, poor Isis is still there. 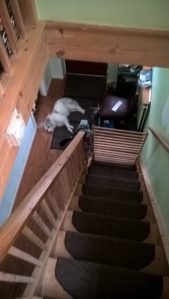 Human Rat goes to bed with a heavy heart.

Even though she should know by now that she is likely to be far more upset than Hairy One is.

More often than not, Isis resigns herself to the new regime and plods off to bed. Perhaps she  even sniggers to herself before she drops off to sleep, knowing that Human will stay awake worrying about her.

Actually, she is doing very well. When she slept on her own downstairs soon after she was adopted, night after night she screamed out and when I went down to her it took up to half an hour to wake her and calm her down. And this happened several times a night.

Even when she decided to join me upstairs, the night terrors continued for over two and a half years. Until quite recently, in fact.

It’s only over the last few months that she has sometimes slept through the night without any night terrors at all. Wonderful. Or she has been able to wake herself from her bad dreams and settle back to sleep.  On other occasions, when she has needed me to wake her, she has woken up almost immediately and quickly returned to sleep.

Each night, since she has been sleeping downstairs, she has had one or two episodes, but she has woken after a few seconds and I have not had to go down to her.

And, now, in the morning she is usually sleeping so soundly that I have to leave my hand by her nose for several seconds before she smells me and wakes up.

Then, of course, there are no hard feelings: she’s a dog!