Posted on August 16, 2017 by patinkingsheath

Poor Isis has a rough time in Kings Heath Park on Tuesday. She begins her walk happily enough, dancing under the trees and shrubs by the railway line.

But when she emerges, the sun is playing nasty tricks on her, doing what she most hates: popping in and out. It’s bright light, shadow, bright light, shadow. She crouches close to the ground by the TV Garden fence and resists all my attempts to coax her to move on.

She is very, very frightened.

The scenario is rare nowadays. Normally when she is this frightened, the only thing to do is to pick her up and carry her to ‘safety’. As my right arm is still out of action, I can’t pick her up. And there’s no-one around to help.

Feeling monstrous, I drag her over to the lower bowing green, and up onto the bank. Then, keeping her on her extended lead, I sit on the grass and let her sniff around.

As soon as she can, she slips through the hole in the hedge onto the next level, and stands on the grass.

Unable, at present, to crawl through the hole without falling over (yes, I’ve tried) I am just about to scramble to my feet to walk round the hedge to disentangle her, when I hear L. calling Dougie on the other side of the fence.

I hear her commiserating with Isis and call through the hedge to ask her if she’ll detach the hairy creature from her lead.

She kindly obliges. Once free, Isis looks calmer. As I expect, she makes her way, ducking and diving in and out of the black shadows towards the Colour Garden.

Unfortunately, as she arrives at the edge of the garden, the sun blasts out again. Poor Isis panics and scuttles into the darkness of the border.

She cowers beneath the thick foliage, her tail stiff and flat against her underside.

Normally, I would wriggle into her retreat and comfort her. Compassionate L does just that. She crawls into the shrubbery and kneels next to poor Isis, stroking her and commiserating.

But Isis won’t be coaxed out.

I explain to Liz that once Hairy One’s out in the sunshine, in a space which has no shadows, she’ll come round.

Now, as it happens, L. practised carrying Isis only the day before when she was spooked in the car park. Again by the sun, I think. The poor little creature pulled away from my side and began scrabbling frantically in the sharp-edged gravel, scraping her pink pads.

In one quick swoop, L. gathered up the astonished Hairy One 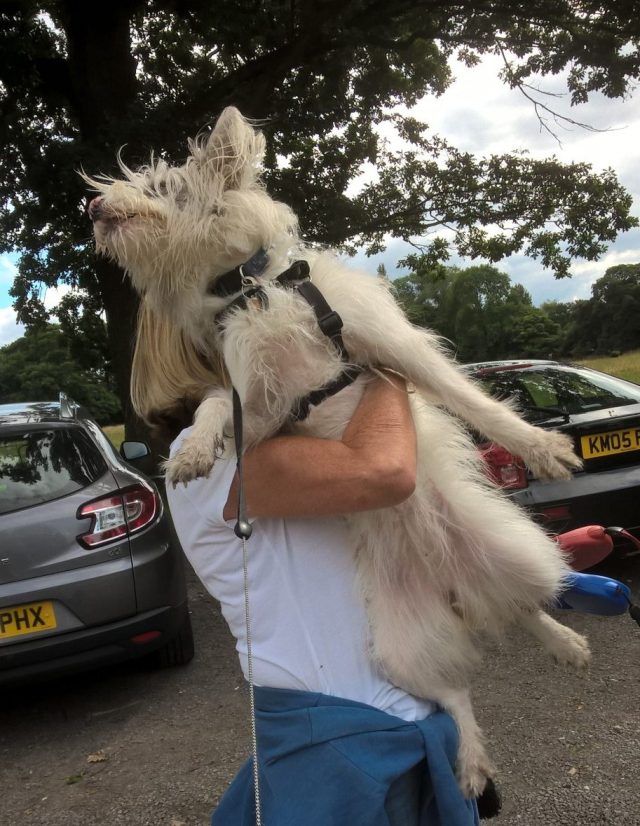 and carried her to the car.

Not a snap, not a growl. After an initial wriggle or two, Isis settled in L’s arms and allowed  herself to be carried.

I am very impressed. Enormous progress for Isis who was once frightened of everyone.

So again L. comes to the rescue.

She sweeps Isis out from under the leafy tunnel, and places her in a carefully selected spot on the sunny grass, well away from threatening shadows.

Sure enough, Isis, now in a very familiar place, begins to revive.

First her tail detaches itself from her underside and hangs straight down. Then she sniffs her way into one of the beds.

Soon, her tail takes up its usual vertical curl.

Then she emerges and begins to play.

She is still jumpy when the light changes, but she’s much more confident now she’s in one of her safe play places.