Quite a lot of ups and downs over the last couple of weeks.

I ask for it. I decide to blog or, rather, brag, about how well Isis is doing regarding the self harming, and how well she is coping with the light and shade in the lane at the back of the house.

Suddenly, the week before last, everything changes.

We are in the lane. There is a very sharp contrast between sun and shade. Isis stays in the shade. She sits close to our neighbour’s garage doors, venturing out only once or twice and then only a few feet into the shade which extends from the garage door to the hedge.

She’s not enjoying herself, and I decide to cut her outing short.

I walk over to fetch her. There are two little spots of blood on her right foot. When I look at her face, I see that her right eye is very bloodshot. I carefully wipe the corner of her eye. The mucus there is pink.

Horror, horror. Panic, panic. My stomach lurches. Something must have flicked into her eye: a  bramble?

I take her in. She is happy to go.

In the house I keep fantasising about all sorts of dreadful outcomes. Again and again I lift up her fringe and peer into her eye.

But she eats her tea with her usual gusto. There’s no sign of blood anywhere. At bedtime she snuffles around on her treat hunt just as enthusiastically as ever.

But every night she growls and snaps. One night she carries on for such a long time that at four a.m. I go down to her. It’s a very long time since I did that. Very soon she falls asleep. I creep back upstairs.

In the evenings too, she flies into her old rages. Not as frequently as she once did, but ferociously.

One evening, we both snap. She’s going for her back right leg, spinning and snarling. I try to intervene. Several times I grab her but she spins so quickly that she drags herself out of my grip. Not once does she try to bite me, but she is becoming increasingly hysterical.

She’s hell bent for leather on attacking her leg. I grab her by the collar. She tears herself from my hands and bites her foot. Hard.

And still she rages.

I grab her collar again, and her back legs, and haul her unceremoniously into the kitchen.

Now we are both very subdued.

Isis has really hurt herself. She limps into the back room and lies miserably on the day bed. Also miserable, I take my food into the front room and try to read.

Later on, though, she allows me to apply Sudocreme to her bitten foot.

In the morning we are both very tired. But dear little Isis still greets me with her usual enthusiasm. I hug her and apologise for being so rough.

Then,  when I open the back door, she refuses to come out of the kitchen with me. She peers up at the sky apprehensively. She ducks her head. She seems as though she wants to come out but is afraid of the uncertain sun.

I try for twenty minutes to entice her from the doorway. 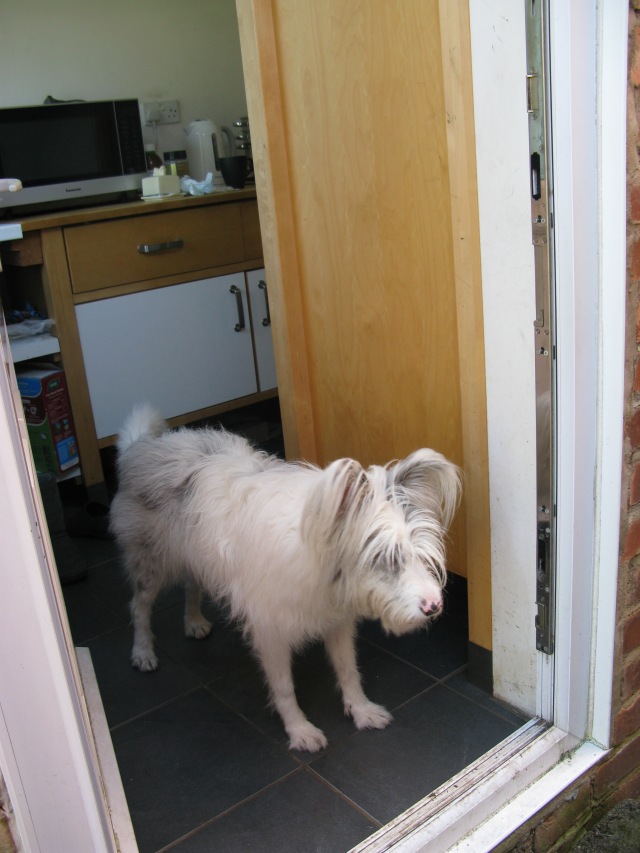 She still won’t step over the threshold.

Will she feel more secure on her lead? I don’t think so. I expect her to run off up the hall. I clip on her collar. She wags joyfully. Or perhaps she’s just relieved. She flicks herself merrily out of the kitchen, onto the step, and into the garden.

The blood spot incident happened about ten days ago. Her eye looks as it’s always looked. I think I saw the blood spots and jumped to conclusions. Not once has she pawed at her eye or tried to rub it against anything.

Ever since the incident, though, she has refused to go for a pee in the garden unless I take her on her lead. And she continues to carry on once she’s left at bed time.