the snake is dead – long live the snake

Twice Human drops off on the day bed, and Isis sleeps soundly without any nightmares: not a sound all night, even when I accidentally poke her with an errant foot.

(This earns me very baleful glares from Daisy in the morning. Poor Daisy. Night times are her time for attention. When I drop off downstairs, she not only misses her kitty cuddles but her bedtime Dreamies as well. When I return to the usual routine, she scoffs her Dreamies and then burrows under the duvet as far away from me as possible. See if she cares! She’s a cat.)

Isis enjoys all her time in the park, even when the sun is bright. 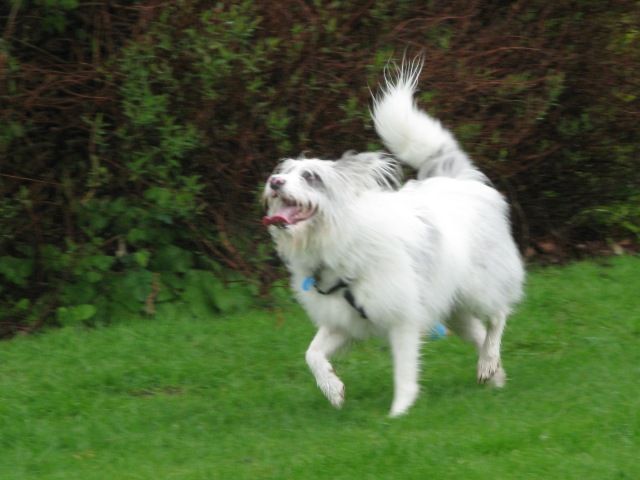 Rather than refusing to leave the car park, or creeping along looking miserable, she makes nests under the fallen tree in Highbury Park and in her favourite shrubbery in Kings Heath Park. When the sun behaves itself, she runs and twirls around the perimeter of the tree or shrubbery perfectly happily. When sun and clouds play silly beggars and brightness and darkness flicker on and off, she retreats to one of her nests until the world becomes stable again.

I continue to take her special ball with us into the lane every time we go there. It’s at least a week now since she laid Green Snake’s body parts to rest on the back room rug, and, on Monday, at last, she picks up her special ball, squeaks it loudly and then trots off to her lane nest under the ivy which grows on the fence.

And then, from the ivy nest,

Excellent. At last she’s playing with a different toy. I won’t need to try to resurrect Green Snake.

A few days later, I take Brown Snake into the lane and drop him casually on the grass. She sniffs him out immediately, snatches him up and with happily waving tail bears him off to the ivy nest.

I feel the relief of parents who have managed to wash and dry their toddler’s comfort blanket before s/he wakes up and discovers it’s missing.

4 Responses to the snake is dead – long live the snake