one diary and a gasket

The week doesn’t begin well. The car has been spluttering and juddering first thing in the morning since a heating pipe was replaced a couple of weeks ago.

I ignore this, as one does, hoping that it’s a speck of dirt which will work its way through the system.

It doesn’t. Inevitably. The coolant warning light comes on and the car stalls half way across busy Vicarage Road. It’s the rush hour, of course. We stutter our way home.

I look up the problem in my handbook to be certain that I refill the correct container.

It’s a while since I opened the bonnet and it takes me at least ten minutes to work out how to do it. Then, frustratingly, I can’t move the cap on the coolant tank.

This is extremely irritating: before the advent of rheumatoid arthritis my hands were unusually strong. I whinge and mutter obscenities. Fortunately,  my head is far enough under the bonnet for no-one to hear.

C., the garage owner asks whether a neighbour could open it for me. No, I explain. They, too, are slowly disintegrating.

Friendly M. comes to collect the car. He, too, has arthritis, he tells me and his fingers take a good bit of flexing before he can use them. “I hope you’re up to the job, M.”, I quip merrily. He assures me that he is. His right hand is the weaker. He can use his left hand.

He refills the tank but in the end we decide it’s best for him to take the car into the garage because of the juddering.

It’s now far too hot to walk Isis to the park, so she’ll have to make do with the lane.

She’s been such a good dog while I’ve been outside talking to M., hasn’t she?

No, she hasn’t, I discover when I open the front room door to let her out.

She has neatly extracted March, April and May from my current diary and left tiny, deep tooth prints on the cover and through the pages of June and July.

It’s my fault, of course. It usually is. I’d left my two diaries side by side on a coffee table.

Isis is not generally a destructive dog. The only time she attacks my stuff is if I shut her in the front room. I’d only expected to give M. the key but then we got into conversation.

I’m undeservedly lucky though. She chose to destroy my current diary 2017 – 18, not the new one 2018-19 which is lying beside it. And, after all, the months she has removed have already passed and it’s not too hard to write around the tooth marks. 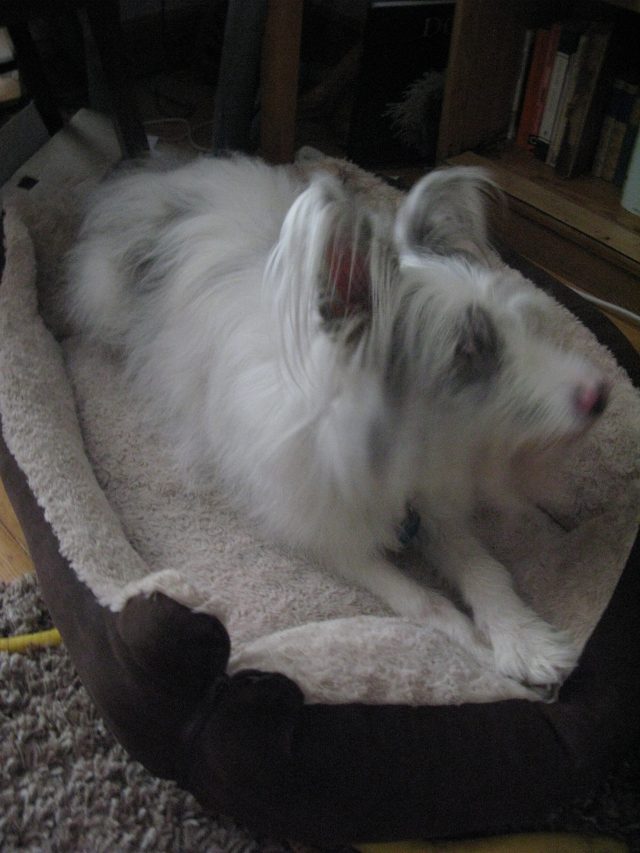 But we only have two challenges. Surely there should be three.

The gasket on the head of the engine is on its way out. The car could survive for a few weeks doing short local runs. The gasket could, on the other hand, blow at any minute, C. tells me cheerfully. I need to check the coolant level frequently.

At least he’s made sure the cap is loose enough for me to undo.

Isis came from the Aeza cat and dog rescue and adoption centre in Aljezur, Portugal. For information about adopting an animal from the

Isis came from the Aeza cat and dog rescue and adoption centre in Aljezur, Portugal. For information about adopting an animal from the

This entry was posted in a very naughty dog, Isis at home, Isis is no angel and tagged Isis strikes again, naughty Isis. Bookmark the permalink.

2 Responses to one diary and a gasket