who have we here, then?

Posted on October 3, 2018 by patinkingsheath

Perhaps I should move house and live round the corner on Morrison Road. This would solve the problem of getting Isis past her no-go locations: the driveway of the lane and that of a house where there’s building work going on and a skip in the front garden.

For now though, I’m relieved to have found at least a temporary solution. Twice now, I have persuaded the Hairy One to cross the road outside our house, walk as far as Morrison Road and then cross back again. She has a few doubts along the way, but one or two judicious tugs and under-the- chin taps get her going again.

No doubt she’ll soon realise what I’m up to, and refuse to cross the road. But on Tuesday it works, helped along by a consistently dull day, and we actually get to the park. 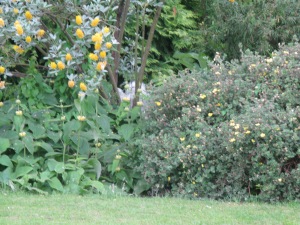 It’s worth the effort. On reaching the colour garden, she bursts delightedly into action, twirling among the shrubs. As a number of people have said, it’s uplifting to watch her.

Then M. and C. arrive with their pretty young chihuahuas Tiger -Lily 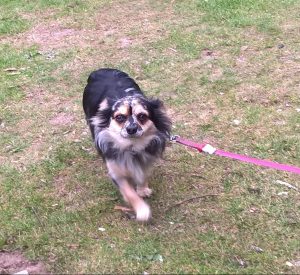 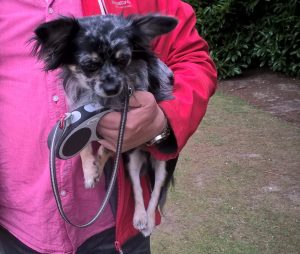 I’ve not come across chihuahuas with their colouring before. They are striking, very beautiful, and  very affectionate, although, I am told, they are also very bossy at home.

Although M. has met Isis many times in the park and at home, he’s not seen her off her lead before.

When I point out the cavourting creature, his jaw drops. He recalls when he first saw her – a very frightened little dog who was panic stricken when other people or dogs approached her. He speaks of miracles.

As he speaks, The Miracle emerges from under a potentilla and trots happily by them without a care in the world

Although Gizmo is apt to see other dogs off, and Tiger-Lily to flirt with them, they don’t bother Isis.

They come up to meet me and I have a great time making a fuss of the dear little creatures.

2 Responses to who have we here, then?