a dog, a cat, a taxi and me continued

Posted on October 14, 2018 by patinkingsheath

The cats begin squawking at 7.00.a.m. I find ‘Two cats’ the most effective of all the Nokia alarms. It truly alarms me: I’ve been using it for months and every time it goes off, I still jump awake and turn to check on Daisy.

Thoroughly awake, I dismiss the alarm. I should know better by now.   Unsurprisingly, since I’ve only had just over two hours sleep, I drop off again.

Oh my dog! It’s now seven thirty. No time for a shower. I hurriedly wash as little of myself as I can get away with. If my worst fears are realised and Daisy poops in the taxi, I reflect, a smelly human will be the least of the taxi driver’s worries.

I tear around the house serving dog and cat breakfasts. Too anxious to eat, I just gulp down a coffee.

Erk! Scrabble, scrabble. Where the hell is Hairy One’s car safety harness? How many pads shall I take for Daisy? I’ve been through the list so many times in the early hours, I know it off by heart and fling all of the items, one by one, into a very large Lidl bag.

The taxi arrives a few minutes early. Isis already has her harness on, so I shoot upstairs, capture poor Daisy and put her carrier in the porch before walking out with Isis.

The taxi driver is utterly relaxed.

“I’ll hold on to the dog”, says the driver amicably, taking the well behaved Hairy’s lead.

First problem solved. The driver stows Daisy in the back of the taxi. I explain that Isis needs to sniff out the distance between the floor of the vehicle and the pavement so she knows how high she has to climb.

Phew! So far so good.

I spread out an old sheet for Isis to lie on. She settles down right up against Daisy’s carrier. She ignores Daisy. Daisy ignores her. I stretch my leg out over the carrier to prevent it from sliding across the floor.

And off we go. 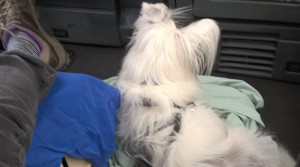 When we arrive at RSPCA Newbrook Farm, the driver carries Daisy over to the Animal Hospital while I guide Isis back to terra firma.

Isis, as always when we walk, is attached to the running belt* around my waist; even so, it’s a struggle to persuade her to approach the door while I’m carrying Daisy in my right hand. My left shoulder and arm are still incapable of opening doors or holding a lead, but, fortunately, someone notices we need help and opens the door for us.

When we are called in, the kind vet collects Daisy while I haul the reluctant Isis into the consulting room.

Isis and I are asked to leave while Daisy has her blood test but I hear the poor little cat wailing with pain on the other side of the door.

We wait in reception for the test results so we’re there for two and a half hours altogether.

A different driver, not so keen on animals, I think, picks us up. He tells me to make sure the animals are kept off the seats. But he puts Daisy in the taxi and carries her to the doorstep when we get home.

On the seats? My animals? No way. On the journey back, they are paragons of virtue.

Altogether, they’ve been away from the house for three and a half hours, and, apart from the difficulty of getting Isis inside the Animal Hospital, we have had no trouble at all.

They have both behaved like little angels. If there were a class at Crufts for exemplary travel in a taxi, my Isis would win it. 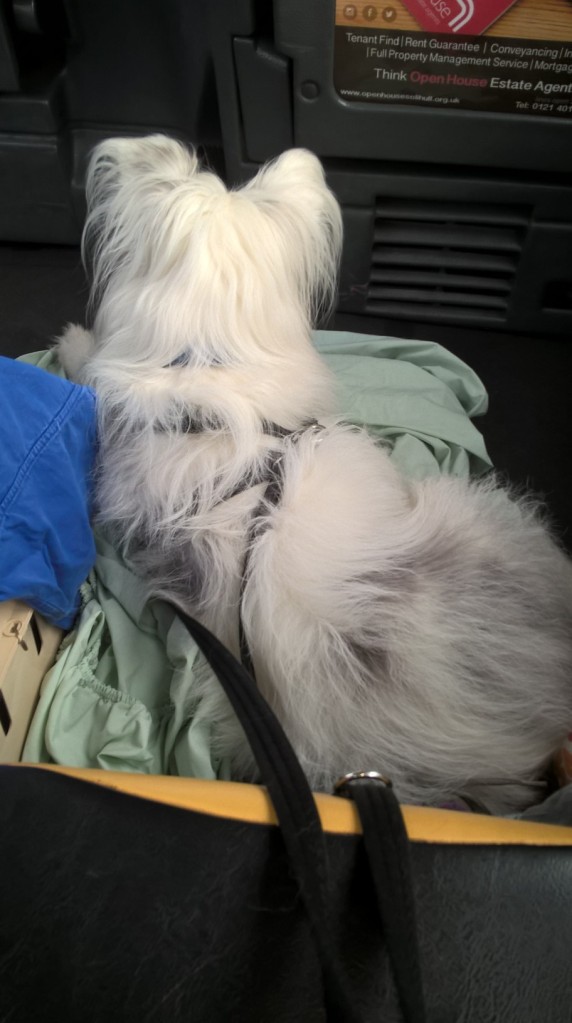 None of my fears were realised. Daisy did not poop and cause the taxi driver to swerve into a ditch. Isis didn’t hunt Daisy. Daisy didn’t frighten Isis. They were both completely laid back about travelling side by side. Apart from two indignant mews from Daisy, they didn’t make a sound in transit.

I can’t get over them!

4 Responses to a dog, a cat, a taxi and me continued