Posted on January 16, 2019 by patinkingsheath

It’s a long time since I bewailed the return of Hairy One’s hysterical approach to mealtimes.

After she came to live here, it took at least two years of gentle training before she calmed down and began to modify her behaviour. Well, lets admit it, I modified her behaviour. She still believed that she needed to defend her dinner from the coyotes and vultures which, she was convinced, were closing in on her food bowl. She controlled herself with great difficulty and only because she realised that I would remove her food if she didn’t.

It was a precarious peace, and relapses were easily triggered.

Unfortunately, as I reported last autumn, when I was ill she had to stay in kennels for three weeks, and by the time she returned home, the old habits had returned.

Of course they had. There really were dozens of animals around her. She could smell them: big, fierce dogs who could swallow a small dog and her food; sly, predatory cats; trickster rabbits, bored with carrots; guinea pigs, horses, even a llama.

As for the birds, you could hardly imagine the hordes of those claw and beaked assassins. What do you expect a dog to do?

Climb the walls. What else?

Retraining has taken well over a year. You know the monotonous routine: Isis begins winding herself up with a few threatening growls and yaps before these rise to a crescendo of snarls, snaps, screeches and loud, strangled barks. Simultaneously, she twirls round to attack her tail and back legs before  launching herself repeatedly up the kitchen wall.

It’s not until I raise the stakes and do not return the bowl, that her behaviour begins to improve.

Now, after about fifteen months, she follows her very nice sitting-to-wait-for-‘eat it’- signal with impeccable table manners.

It’s a strange thing, but I only become fully aware of the transformation when the winter sun is low in the sky. Isis hates low in the sky sun. It freaks her out, poor little dog. She flinches, cowers and slinks close to the ground, desperately seeking cover.

Over the last few weeks, we’ve had a lot of bright morning sunshine. At breakfast time, strong rays, distorted as they pass through the frosted glass of the front door, slice into the hall, and Isis barks loudly in annoyance.

At first my heart sinks. Oh no, not again, just when she’d got over her kennels experience.

But I’m wrong. The barking remains a response to the specific sun nuisance.

So far, she has not returned to the mealtime hysteria of earlier times. 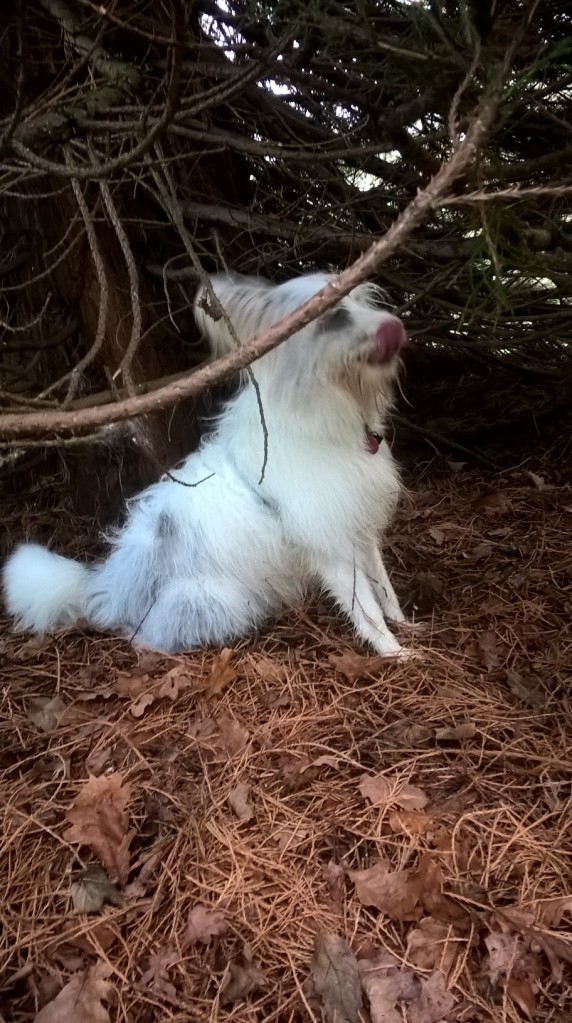 Although she is not, of course, in her dining room , this is exactly the position she takes up when waiting to eat!

2 Responses to Isis dines in