parks and dogs and people

Spring has been popping on and off the scene for a while now. First the snowdrops, then the daffodils. Now early wild flowers are creeping out, buds are sprouting everywhere, and dormant brambles stretch themselves after winter and prepare to snake across all the little woodland tracks.

Damn. That means instead of strolling along the little tracks upright as I’ve been able to through the winter, I’ll have to be bending down every few feet to lift the thorns out of Hairy One’s path.

The birds, too, are engaged in a frenzy of activity. Everywhere you walk, there are treefuls of twitterings.

Moorhens are already sitting on their first batches of eggs, 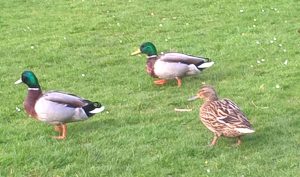 while some female mallards have difficult decisions to make.

Today the wintry wind has been replaced by a warm breeze. Spring is definitely here. Everyone feels it. You can tell by the jauntiness of their walk, and the fact that they are looking up instead of lowering their heads against the battering wind and rain

It’s a time for lingering and looking, listening, and sniffing the air.

And for conversation too. Because of Isis, I get to know people who otherwise would have walked past with a nod or a smile.

New dogs are making their debuts in Highbury. Most of them gaze in astonishment at Isis as she twirls and twists and leaps in splendid isolation at the edge of the woodland.

Their humans are equally impressed. Often there’s the question, “Is that your dog?” And when I admit to being the strange little performer’s human, they usually continue

“We’ve been watching her for a long time, and we’re dying to know what she’s doing.”

Today, Vie, a very sweet eighteen week old German shepherd is rooted to the spot by the sight of the hairy dervish dancing in the distance. She can’t take her eyes off Isis and eventually her humans have to physically move her in order to continue their walk.

I am sitting with a new park friend, Is. on a felled tree trunk, and Vie’s person and his young daughter join us for dog talk.

Is. had only been in Birmingham for a few days when I met her a week or two ago. She had just come over from Corsica with her lovely little dog Zenda.

Arrested in mid stride by the apparition of Hairy One prancing in a sudden downpour, Is. came over and introduced herself.

It was her first visit to Highbury, and she had already fallen in love with the park.

Parks in French cities, she tells me, are much more neat and ordered, not ‘natural’, like Highbury. The grass here is a much deeper shade of green, she says and she can smell the sea on the breeze. She is taken aback by the all the birds and the variety of trees.

I tell her about the woodland trail, and next time we meet, she and Zelda have walked there and fallen in love with it.

Today, as soon as she spots me, Zelda zooms over for a fuss. How lovely.

2 Responses to parks and dogs and people