what a well-behaved dog!

Yes, as you might have noticed, Isis and I are very fond of Highbury Park; nevertheless, I didn’t intend to spend four hours there yesterday.

We’ve had a good walk with the doodles and are on our way back to the car. At least, that’s my intention. Isis has other ideas, and skips happily off piste to play. After half an hour, I fetch her. “We’ve been here for two and a half hours. Breakfast time.”

Even if she could hear me, Isis would be unimpressed. When she’s in the park, she doesn’t give a jot about eating.

I’m looking forward to my Shredded Wheat, and I’ve left my water at home, so I’m feeling thirsty too.

As we leave the car park to make our way to the main road, I hear a “flub-flub-flub ” from the nearside front wheel.

Oh no! This was the sound I heard one night a week after I had the car. I was unfamiliar with the car’s sounds and symptoms, had inadvertently driven home from Selly Park with a flat tyre and had shredded it.

I draw into the passing area and stop.

(Do other people stare at one of their car tyres and convince themselves that it’s flat, then look at everyone else’s tyres and realise that they look flat too? Or is it just me?)

I find a particularly large chunk of gravel deeply embedded in the tyre, and remove it. That’s what must have caused the trouble.

Yes, the tyre looks flat. Obviously a slow puncture. I dare not try to drive home on it. Look what happened the last time I did that.

I ring the breakdown service and have to admit that I’m not sure whether they’re my current service or the one I had last year. The patient lady on the other end of the phone can’t find my details and puts me on hold. While I’m waiting, I find the name and phone number of the service, Green Flag, which I should have rung.

I’m on hold for quite a while, since, unsurprisingly, my details can’t be found. It would be impolite to ring off, of course. I must wait and apologise.

My anxiety mounts. What if my mobile runs out of charge before I can ring Green Flag?

Eventually, I get through to them. They should be here in an hour. Thoroughly annoyed with myself, I sit in the car, read the news, and try not to think about water.

There’s water and a bowl in the back for Isis, although she’ll seldom drink in the car. Fortunately she has had a long drink from the little culvert. I ponder the wisdom of having a glug or two from her bottle, but decide against it.

Drivers travelling along the park road from different directions struggle to get round one another because I am occupying the passing bay. They give me dirty looks just as I do when I come across some idiot blocking the space.

Should I take her back into the park while we’re waiting for the breakdown man? 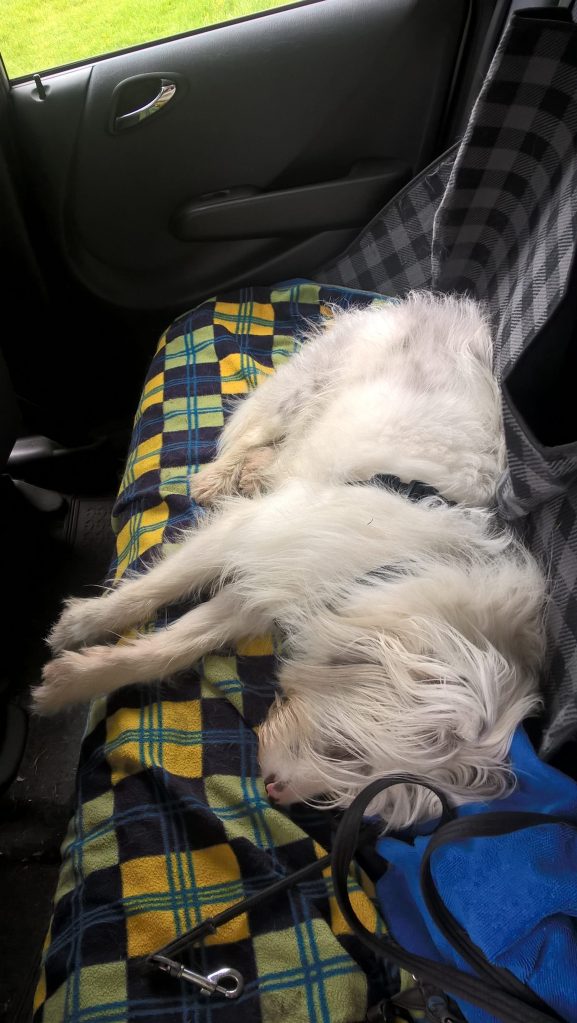 Instead, I empty the boot so it’ll be easy to access the spare wheel. Then I read some more news.

My previous dogs would have been hyper-vigilant and very restless. Not Isis. She is perfectly relaxed and sleeping peacefully in the back. She doesn’t put a paw wrong,  even when the breakdown man gets into the driving seat.

“You don’t have a puncture”, he tells me.

He explains that the ‘flub-flub-flubbing’ was most likely caused by a stone stuck in the tyre: it would have been the large one I removed. He flicks all of the remaining tiny gravel particles out of the tyre tread with a nifty little tool. He tests the air pressure. It’s perfect.

I can’t believe it. The humiliation!

I can’t apologise enough, of course, but the man is very kind, and assures me that “That’s what we’re here for.”

He’ll wait while I drive off, but he’s sure there’ll be no more funny noises.

4 Responses to what a well-behaved dog!