Posted on October 10, 2019 by patinkingsheath

Polymath asked for a natural burial: no pollution, no religion, no speeches, no formal funeral. On Tuesday, we gather at Westall Park Woodland Burial Ground to say our final farewells.

Niece K brings with her flowers picked in the morning from her father and stepmother’s garden near Lincoln. As the car reaches Newark, a stowaway is discovered, a little jewel of a cricket, nestled among the foliage of the bouquet.

Before she places her flowers on the coffin, K. carefully disentangles tiny cricket’s flower stem from the others and lays it on the grass, a few feet away.

Polymath would have loved to know that she has a cricket for company, K. and I agree.

There are other small and beautiful creatures about.

We know that Nancy doodle isn’t small, but I leave her in the image to demonstrate how diminutive puppy Bo is.

Although she’s tiny and only fifteen weeks old, Bo is fearless. She’ll bounce up to any dog, whatever its size.

One of her favourite playmates is Derek, a large, exuberant standard poodle. Kind-hearted Derek is totally tolerant of Bo’s audacious play attacks, and even lies down so that she can jump on him.

It is rare for larger, older dogs in the park to snap at Bo. Like most dogs, they recognise a puppy’s vulnerability. 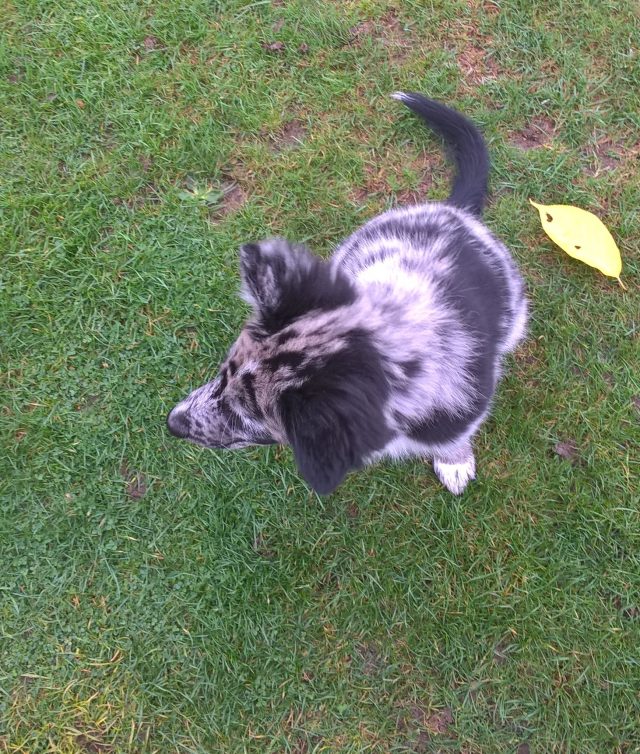 She’s delightful. She’s already trotting obediently by S’s side, and responding diligently to recalls. She’s beautiful, and as soft as the inside of a feather duvet. I can’t keep my hands off her!

She’s much more timid than Bo, though, and shrinks when a much bigger Lexie, also three months old, runs over.

She needn’t have worried. This dog might be a giant, but she’s kind and gentle too.

Finally, here’s gentleman Blitz again. Strong and boisterous he may be, but he is clearly aware that Isis is vulnerable.

While his human Y. and I are chatting, Isis decides she’d like to be somewhere else. She swiftly removes herself from the scene, disappearing into the wooded area adjacent to the car park.

As she vanishes into the trees, Y. and I set off in pursuit; Blitz, however, shoots ahead, finds Isis and returns to show us exactly where she is.

6 Responses to creatures great and small