Posted on April 5, 2020 by patinkingsheath

Dishevelled, that’s what she is. Not exactly dirty. She doesn’t look neglected, tangled, ratty haired. I peer more closely. No, she doesn’t have bits of pine leaves embedded in her chest. There are no strands of grass stalk woven into the hairs of her nether regions, no balls of hair under her paw pits. She doesn’t smell of anything untoward.

She just needs grooming, I decide, surreptitiously fishing out the plastic box from under the coffee table and placing it behind her on the day bed.

I check that all the required items of torture are there: yes, her special scissors, brushes, comb. Ah, mustn’t forget the plastic bag. She seems to have called a halt to moulting, but there are always a couple of handfuls of soft hair, and the blackbirds, robins, magpies and crows are nesting.

One outing a day isn’t enough for Isis, and she spends at least an hour each evening  flinging her toys around and vigorously shaking the dusty rug. Today she occupies herself in this way for two whole hours, so now she’s quiet and relaxed.

I place a hand very close to her muzzle. She twitches her nose and stretches contentedly. I stroke her head and whisper sweet nothings into her nearest ear.

I sniff her ears. Nothing wrong here. I lift an ear flap. Ah, a dot of something which shouldn’t be there.

It only takes about three seconds for me to take a cotton bud from her box, but when I turn back to her, she has closed her ear opening so tightly that I can’t find it.

Both ears are hidden under an apparently seamless carpet of hair.

I get the message. Deciding to return to the inside of her ears later, I move on to brush behind her ears with the softest of her collection, a baby’s hairbrush.

The brush makes no impression on her hair at all, but I always begin grooming with this one, because its softness seems to reassure her, and she hardly notices when it’s exchanged for the much stiffer, official dog brush.

There are no mats, but two or three little snags need teasing out gently with the metal comb.

Next comes one of the most difficult tasks: her whiskery face. She doesn’t growl or snap at me now, or snatch away the brush, but she hates it when I clean the hair around her mouth and chin, and turns her head this way and that trying to avoid my attentions.

Oh, it doesn’t look too bad today. Perhaps there won’t be any mud. But when I lift the hair away from her upper lip, I see them: little bundles of damp hair glued together with  streaks of black mud.

I place the fingers of one hand between the hair and her top lip and brush gently against my fingers. As soon as I begin, of course, she moves her head away. This gives me access to the other side of her mouth. We begin the process again.

“It must be horrible having mud around your mouth,” I croon to her stupidly as I work, “And it’ll soon be done.”

Some of the drier mud comes off in the brush, but the rest I have to pick out with my finger nails. A tiny, plastic doll’s hairbrush dislodges any mud specks which remain.

Once she’s been brushed under her chin, we both relax.

Soon, her shoulders, chest, back, thighs, stomach and tail are brushed and combed, and she is a restored to her usual soft, fluffy self. 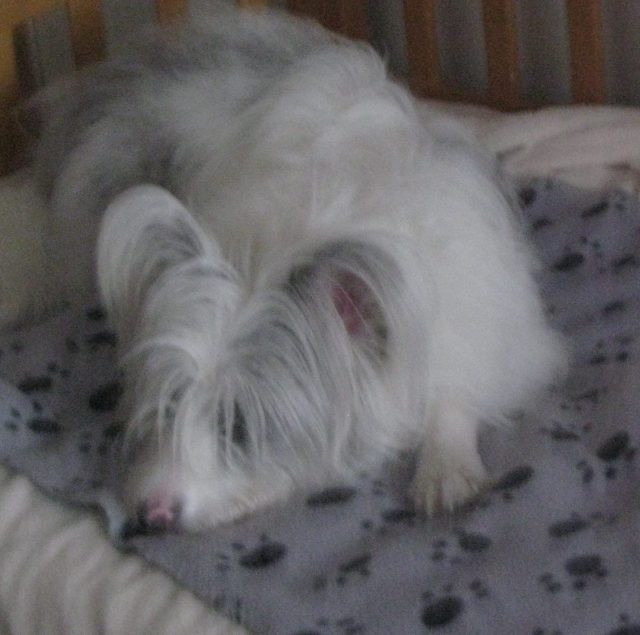 As soon as I replace her collar, she’s up like a shot, leaping into her dog bed, waiting for her reward: two mini Markies.

The following day is Sunday, and off we go to the park. Isis looks beautiful ………. but that’s another story!