some dogs smell nicer than others!

Posted on August 2, 2020 by patinkingsheath

It’s Tuesday. Although there is bright sunshine, the light is perfectly stable so Isis is prancing around the edge of the second meadow, completely absorbed in her play.

I am sitting on the once comfortable log nearby. It used to be one of the most ergonomic logs in the park until persons unknown turn it over one night. I try to turn it back to its original position, but it’s too heavy. I can’t even rock it.

Often Isis plays in this vicinity for an hour or more, and it’s damned uncomfortable standing for this long, so I settle down on the least buttock numbing bit of trunk I can find, and begin to make blog notes on my phone.

Suddenly, I become aware of a small, bouncy presence approaching me. Before it arrives, though, it is stopped in its wobbly tracks by a firm command of, “No! Come, Luna!”

Its little forehead wrinkles, but it obeys.

Three times more it attempts to leave its human’s side, and three times it returns when called.

The fourth time it lifts a paw in my direction, it’s told, “O.K. You can go say hello!”

Pup rushes up to the log to greet me. This, its two humans tell me, is Luna. She’s four months old, and has only just begun visiting Highbury.

She is beautiful and has that lovely new pup smell.

I compliment Luna and her humans on her excellent recall. They tell me that although they very much wanted a boxer, they gave it a lot of thought. They know how boisterous boxers are and they’re determined that she will be a well-mannered dog.

They’re obviously succeeding. She’s delightful. I could easily have succumbed to being a puppy thief!

The following morning, another lady I’ve not seen before is on her way back to the car with another very young puppy. This puppy is Skye, a shy little cocker/lab. She, too, is four months old. She’s come to Highbury for a fifteen minute walk. Her brother is at home, waiting for his turn.

A puppy can never be sure something nasty’s not going to happen.

The pups’ human explains that she brings them out together for some of their walks, but wants them to feel confident on their own too, and not become over dependent on each other. She also wishes to avoid them developing over boisterous ‘pack’ behaviour when meeting other dogs.

It’s good to meet such responsible people who clearly understood the needs of their dogs.

(Every time I read the last sentence, it sounds horribly patronising. It’s not intended to be. It’s just that it’s uplifting to see new puppies and know that their people are intent on giving them good lives.)

And, of course, wriggly, sweet smelling very young puppies do tend to be irresistible.

Talking of sweet smelling creatures … doesn’t  remind me of Isis. It’s a few days after my puppy encounters, and my dog is definitely not irresistible.

To be fair, she usually smells very pleasant. But on this particular day, smelling pleasant is  not on her agenda. She is hell bent on sneaking past me in order to wallow in the den she has made among the rosebay willow herbs.

It’s quite a des. res., I must admit, having a long, tall-grass drive leading up to a shady plant porch which opens into a pleasant lounge area. Unfortunately, I discover when I wade into the plants to retrieve her, she has recently added a bathroom.

A large, deep, boggy puddle takes up most of the space in her extension and, most convenient of all, at the rear of the bath is a door leading off into thick, almost impenetrable, foliage.

Into this almost impenetrable foliage, a dog is able to hasten when pursued by a human who believes it’s time to go home for breakfast.

One has to be pretty nippy to grab her before she hurries through the bathroom’s rear exit. The boggy jungle is certainly impossible for a human to navigate without tripping and falling flat on her face.

The only alternative is to wait for the recalcitrant one to return. Which, fortunately, she usually does if I walk away.

Today, when she appears she looks and smells revolting.

There’s nothing for it. We must go to the ‘clean pond’, as L, Y and I have always called it. It looks mud-black and murky because, over the years, layers of fallen leaves have sunk to the bottom. But the water above them, run-off water from the meadow above the pool, is clean and transparent, providing an excellent facility for swilling down dogs before they get into the car.

Isis is remarkably cool about being shoved into the pool. She even tolerates Human  sploshing cupped handfuls of water under and over her. 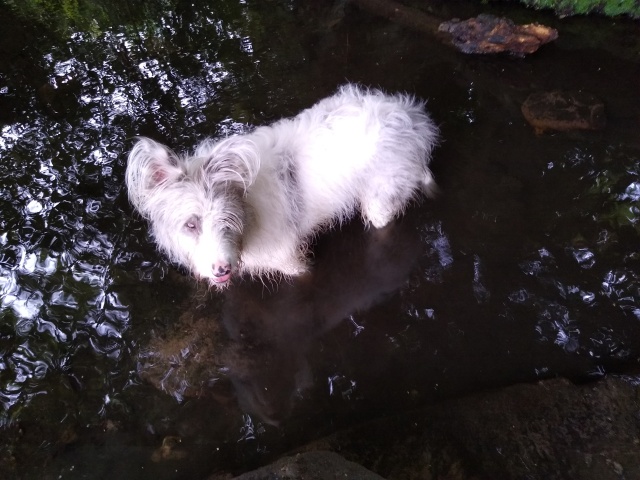 Surely I must be clean enough by now.

Today, she looks almost spotless when she emerges. She still has a boggy niff, though.

Until, as luck will have it, the heavens open as we cross the little waterfall on our way back to the car park. Isis, of course, is delighted and begins to race to and fro across the grass, executing joyful little leaps and twirls as she goes.

Although we’ve already been in the park for over two hours, she is so happy that I haven’t the heart to take her home.

As the rain becomes heavier and heavier, she runs faster and faster, her joy turning into wild ecstasy.

Sensible people rapidly leave the park, so I don’t need to worry about Hairy colliding with innocent humans or dogs. For almost an hour I stand under a tree and share her joy.

By the time the sky has run out of rain, my dog is not averse to being led to the car.

She is as soggy as a bath mat and she smells deliciously of fresh grass.

4 Responses to some dogs smell nicer than others!