dining out and an afternoon in the woods

Posted on September 4, 2022 by patinkingsheath

I drop a harness off at Y’s. She invites me in for coffee, but Isis hasn’t had her tea yet, so I decline.

“She can have her tea here,”  Y offers, “I’ve just fed Blitzi, so there’ll not be any competition.”

Poor Blitzi. He’s never shown anything but kindness to naughty Isis. On more than one occasion in Highbury Park, he’s seen off a dog which has shown aggression towards her, yet when he visits her, she bullies him mercilessly. Last week when he came to our house, she’d not allow him to settle in the spare dog bed I’d placed next to his human’s chair. Each time he tentatively set a paw in it, she leapt up from the rug and nyaffed sharply at him. Eventually, he disappeared upstairs and slept on my bed until it was time to go home.

I fetch Isis from the car. She knows Y, and has been here before. Since it’s not her territory, she doesn’t feel the need to menace Blitzi. But he’s not leaving anything to chance, and  hastily retreats into the garden.

I thank Y for her kind offer but explain that I’m pretty certain Isis will not be confident enough to eat away from her own house.

The next thing I know, she’s sitting in the kitchen doorway, nose focussed on the delicious meal of Harrington’s wet food and cooked minced beef which Y is preparing for her.

When Y places a huge, heaped dog dish in the hall, Isis, of course, proves me entirely wrong, and tackles her food with enthusiasm. Because the portion is so huge, she can’t eat it all, but certainly eats as much as she can.

When she joins us in the garden, she looks very relaxed and replete.  She settles herself down at our feet, within a few centimetres of poor Blitzi’s bed. He’ll not chase her off – he’s too kind. He’s also intimidated by her, so he creeps away from his bed and settles, somewhat mournfully, on the grass.

Y. has just bought another car, having been without one for eighteen months. (Her old car was vandalised by an opportunistic rat who, finding nothing more palatable to eat, gnawed through the electric cables.)

She wants to familiarise herself with the new car, and decides to take Blitzi to Clowse Woods on Wednesday. She invites Isis and me to join them.

Blitzi is already on the rear seat when Y picks us up. Although Isis is perfectly happy to jump into her car or to sit with me in someone else’s car, she is very reluctant to join Blitzi in this strange car.

After much fruitless cajoling, I lift her up and deposit her in the car.

I don’t have the impression that Blitzi is overjoyed to see his travelling companion. He has a decidedly mournful expression, and shuffles nearer to the door. Isis, too, settles down close to her door. There’s at least an eighteen inch gap between them.

The humans chat away merrily in the front all the way to the woods. They hear not a sound from the rear.

It’s at least eighteen months since Y and Blitzi came to the woods, and more than two years since I brought Isis here. Both dogs begin a very long sniffathon, noses turning over fallen leaves, or buried in undergrowth, or simply twitching millimetres above the hard, baked paths like miniature hovercrafts.

Although it’s a warm and sunny day, the light is steady, not flickering, and Isis is content to wander with us beneath the trees or linger behind to sniff and resniff particularly alluring scents.

Blitzi, who always wants to greet passers-by, is delighted when he spots other walkers. He rushes up to greet them. Today, everyone speaks to him kindly, he gets countless strokes and pats, and is as happy as Larry (whoever Larry is or was).

We make our way towards a clearing crammed with heather, sit on a log, listen to the silence, and breathe in the fragrant wood smells: a blend of earth, decomposing leaves, bark and living plants.

I wish I could capture a bedroomful and take it home with me.

The dogs lie close by, relaxed and contented. 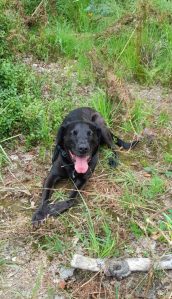 We stay in the clearing for well over two hours.

Before we amble back, Y. throws balls for Blitzi until he calls a halt and sits down.

Both dogs seem pleased to scramble back into the car. Before we set off for home, I point out the difference in their body language from when we set out. Both their heads rest on outstretched forepaws, while the hairs of their tails mingle, black amongst white.

We’ve all had a perfect afternoon.