Posted on December 4, 2022 by patinkingsheath

It’s a dull, damp day and we’re walking up the path which leads to Holders Woods. I intend to walk on a little further and turn either left to walk along the lane which leads onto the first of the fields, or head off right to follow a path through the woods. I’ve told Isis it’s her choice today.

She doesn’t choose either of these routes, instead she insists on taking the first turning on the left, from which little tracks, now hidden beneath many layers of leaves, meander through the trees close to the river.

This surprises me as she’s not wanted to walk this way for weeks. I attempt to head her off as the tracks are bound to be very muddy, and, already, the light is fading. I admit that I find this place creepy sometimes: the trees, now without leaves, huddle together, their branches black and thrusting, so that it’s not possible to see more than a few yards ahead. We rarely meet a dog walker here.

But Isis insists, and begins to trot jauntily onwards.

Not for long, though. Hardly has she set paw on the narrow track, when she leaps backwards as though she’s been stung, turns herself round smartly, and dashes back to me. What on earth’s the matter? Once she has postioned herself safely behind Human, she lifts her head and gives a small, not very brave woof.

Now, it’s very, very unusual for Isis to bark when she’s out. Once she leaves the house and crosses the pavement – which, as we know, she considers to be her territory – she seldom makes a sound until she’s back home again.

I know she’s not warning me about a dogless stranger lurking nearby, because that would certainly provoke one of her loud, menacing alarm barks which make the hair on my arms and neck stand on end. I look closely at the spot where she encountered the ‘danger’, but can find nothing. Has an enemy left a particularly potent scent? Did some creature dart out of the undergrowth and nip her? But what sort of creature? Who but woodlice, toads or worms live in this damp undergrowth?

Worms? Ah! The mists of time suddenly lift, and I float back over the years ………….

I think it’s Hairy One’s first spring in Britain. She’s entertaining herself exploring the long grass at the edge of the little wood in Kings Heath Park. She’s on a very long lead, and when she begins a dance ritual, approaching the long grass cautiously, then hastily  retreating, I move closer to see what she’s up to. I am fascinated by what I observe, but still mystified.

She seems to have discovered something hiding in the grass. When she’s close to whatever it is, she stretches her neck forward and tentatively sniffs, then she pounces and pats the ‘something’ before jumping back. I search among the long stems but all I can see is a thin, bendy twig which has sprouted up through the soil, obviously determined to grow into a sapling.

What does she think it is – a snake?

I describe her behaviour in the week’s blog, and Kerry, who is one of the founders of the Aeza cat and dog rescue in Aljezur, Portugal, where Isis came from, told me that is exactly what Portugese dogs do when they come across the little snakes common in the area.

I’ve not seen Isis performing the snake finding routine since, although, of course she now runs free in woods and parks, so she may have made the odd discovery unnoticed. Certainly she’s not performed as she is performing today.

I stare at the track again, and realise that the ground is covered as far as I can see, with long, greeny-yellow stems which have separated from their fallen leaves. I return to Isis who is still reluctant to advance, “Dear, dear, dear,” I murmur sympathetically, stroking her head, “Are those nasty little snakes frightening you?”

I know she can’t hear me, but perhaps there’s a comforting vibration, or the pats make her braver, because she allows me to lead her back onto the beginning of the track where she first became frightened. She’s still quite nervous, and extremely skittish, treading on the spot among the snake stems. The stems are damp and flexible,  so that when a dog steps on the end of one, the other end flips up and taps her legs. She spends a long time sniffing and patting each one and then snatching her paw back.

Eventually we walk further into the wood where there are still stems underfoot, but most of them, overshadowed by the crowded trees and soaked by the dripping mist, are limp and soggy. Some, in more open spots are leaning out over the path, so, intermittently, poor Isis jumps back as though she has touched an electric fence, but the jumps are less frequent and she isn’t afraid to go forward. Now and then we come across thick branches which have fallen across the path, “Here’s a python,” I tell her, but she ignores me. 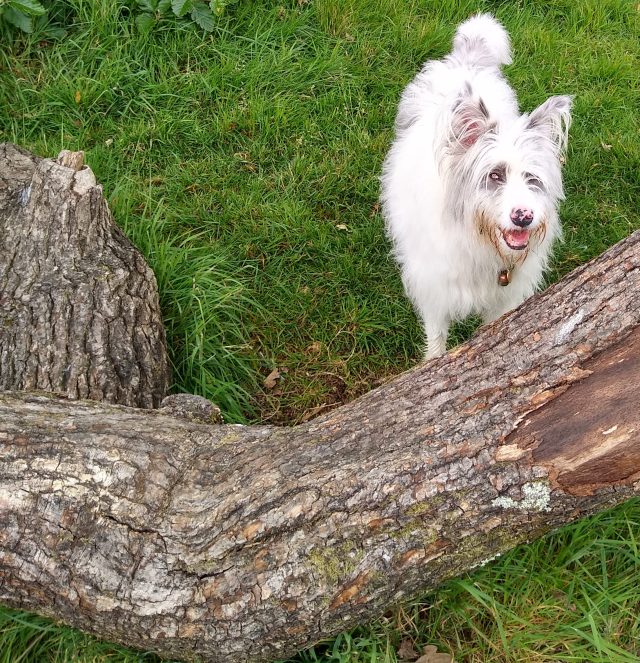 She was taught long ago how to tackle pythons, and when a hand is placed on her flank, she’ll clambour or leapfrog over them.

We reach the lane. There are a few more stems scattered on the field but, braver now, she sniffs them, backs away and carefully circumnavigates them.