Posted on July 5, 2017 by patinkingsheath

Note – In order to preserve the  dignity of the dog, the subjects of this case study are referred to only as ‘Dog’ and ‘Human’

‘In my title I am not suggesting for one minute that Dog is an understanding animal. Not at all. Humans are unfathomable, so why bother? No, what I mean is that Dog is an animal who must be understood.

It should be simple, really. Any dog knows that. All Human needs to do is to stop and think about Dog’s behaviour and ask herself, “Why?”

Following this very straightforward advice would save Human a lot of trouble.

Study these examples, and I’m sure it will be obvious whom to blame. And the culprit does not sport amazing ears and a wonderfully fluffy tail.

Human knows perfectly well that Dog has built up a nose map of the area around and alongside the pine trees in Highbury Park and is now confident enough to run there.

Dog had to concentrate very hard on accumulating this knowledge. There was a lot of groundwork. 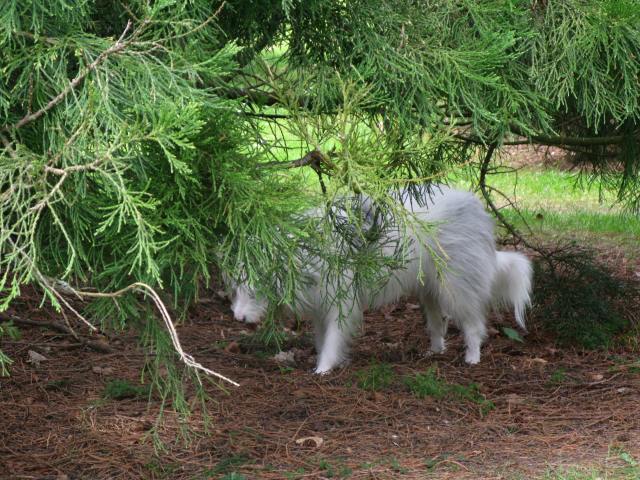 It took her almost three years. First, she sniffed and danced on the end of her extending lead, then she did lots of tentative exploration, and after that she had to memorise all of the routes.

But now she’s mastered it, she can really run. And I mean run. She’s been increasing her speeds for months.

Human even boasts to friends that clever Dog has sussed out where it’s safe for her to run, and how she never runs where there are obstacles to crash into. And so on and so on. Boast, boast, boast.

But does Human take this into account? Of course not. She stands in the way, and before Dog can smell her, crash! It’s too late. Then she wonders why she’s face down on the ground.

Apparently, some people never learn. Last spring there was a similar scenario. After two years on her extending lead Dog is pretty proficient. She knows now that Human will not allow her to crash into anything. She sensibly stands still on all four paws if she is unable to extricate her legs from a particularly intricate lead tangle. (Having spent the first two years of her life tied up, she is, of course, able to  deal with straightforward tangles herself.)

Human must be aware that Dog has taught herself to stop and start on the head of a pin; yet, what does the silly b. do? She stands with her back to Dog, yattering away to Betty dog’s person. Naturally, she doesn’t notice when Dog, bored with the conversation, is ready to leap off in the opposite direction.

The fool is dragged backwards so fast that she lands on her back on the meadow.

The obvious lesson to learn (going forward, as the politicians endlessly say) is this: there are situations in which Dog, although blind and functionally deaf, is completely confident. In these situations, obviously she will want to run.

A dog’s own garden, once a dog has become accustomed to the brambles and carelessly scattered flower pots, is a safe place. Yet Human stands in the way watching – even taking photos of Dog dashing around with her yellow snake.

She even stands in front of Dog taking photos. Note: This irrational behaviour is not unusual for some humans.

It should be noted, however, that this silly behaviour could have had far more serious consequences. It was only by chance that poor Dog’s play was not interrupted. And think of the impact on Dog if she had been seen to drop her prey.

Dog has been let out for a pee. She has been playing in the garden for about thirty minutes. Human enters the garden, taps Dog under the chin (the sign for ‘come with me’).

After eating her dinner, Dog pees on kitchen floor.

Human is astonished. Dog is fastidious and never pees in the house. At last dim Human realises what Dog had been trying so hard to tell her. Dog had been playing and hadn’t had time to pee.

The main point for students to note here is that nowadays, when Dog is tapped under the chin in the garden, she obediently walks into the house. Yet Human doesn’t question the growls or the snapping until she’s mopping up a gigantic pool of urine thoughtfully done in the doorway.

The inevitable result is embarrassment for Dog who didn’t wish to pee on the floor. The unfortunate animal, whose bladder is uncomfortably full, is also forced to eat her dinner too quickly

Dog has been caught off guard and is groomed, without warning, in the kitchen. Dozens, but dozens, of burrs and grass seeds are removed from unmentionable parts of her body.

Throughout the whole unpleasant process, Dog stands still. No growl is uttered. Not a snap passes her lips.

Following a long-standing arrangement regarding kitchen groomings, Dog retires to the futon as soon as the grooming is finished.

Minutes pass and no reward appears.

Human continues to potter mindlessly in the kitchen.

It is not until she hears two loud, sharp barks from the futon next door that Human recalls that Dog has not had her rewards.

In this case, Dog has had to sit and wait for at least five minutes for what should have been instant.

Remember. A dog does not like, or deserve, to wait.*

*For further information see Chapter 10 Life is Too Short.

This entry was posted in deaf/blind dog, deaf/blind dog plays, Highbury Park, I'm off my lead!, Isis at home, running, running running, strange behaviour, walking in the park and tagged Advice for dog owners, dogs deserve respect, how to treat a dog. Bookmark the permalink.