Posted on July 9, 2017 by patinkingsheath

Thursday July 6th, and we’re in Highbury Park when we meet Jc. with Harry, Maggie and Ruby.

Jc. is a park friend I’ve known for many years. Known and admired because, apart from being a kind and generous lady, she is an animal rescuer par excellence.

She didn’t draw the line at pets either. A few years ago, she spotted a very large, unhappy fowl – I don’t remembered its species , but it was not a common one – at a local market. Naturally, she bought it, popped it in the car and took it home where it lived its life out in comfort.

Then there was the feral cat discovered by Jc.’s daughter. Jc. drove carefully down the lane where the poor animal was hiding, stopped her car and got out. When she called the cat, it trotted towards her and got into the car.

And the poor little guinea-pig who was starving because its overgrown teeth prevented it from eating.

Jc.’s little yorkie Lizzie was one of my best dog friends. Even when she was very old, if I  knelt on the path and held out my arms, the little dog would race towards me for a fuss. Harry, her ‘brother’, was much loved by my dog Ellie. Harry didn’t care for young upstarts, but she wooed him with gentle nuzzles and kisses until, eventually, she won him over.

Isis arrived on the scene soon after little Lizzie died. At this time, she was at her most challenging, and, over the months, most of the walkers in Kings Heath Park became used to the sight of Isis going through her small repertoire. This comprised:

the ‘inch-by-inch’, which came later and consisted of Human tapping, stroking, patting, cajoling, and Isis deigning to move forward at the rate of an inch every five, ten or fifteen minutes

and, I am ashamed to admit, Isis digging in her heels as she is hauled along by her harness.

When I began to understand and differentiate among her various behaviours, the scene was frequently of a very worried little dog being patted and stroked continuously and moving reluctantly along a particularly threatening path, or a pathetic, but more relaxed, little creature, front paws hooked over one of Human’s arms, head resting on paws as she was carried along a sun dappled stretch of ground

I can’t remember which of these pathetic scenarios was being played out when Jc. first met Isis, but I’ll never forget Jc.’s empathy and her words of encouragement. She even predicted that one day Isis would walk beside me off the lead. I couldn’t believe that would ever happen. But it does.

Jc was very impressed with Hairy One’s story, and said, “When it’s time for me to have another dog, I’ll adopt him or her from Dogwatch UK.”

About five months ago, she adopted Ruby. 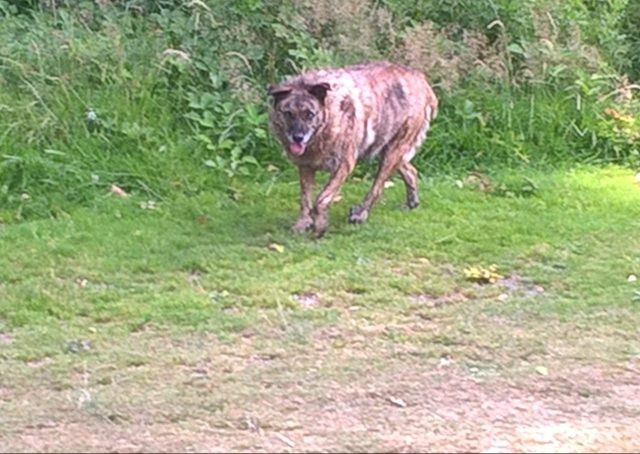 You can still see the apprehension in Ruby’s little face.

Poor Ruby was found in abandoned in a car park in Spain. Her rescuers took food to her every day for three weeks before she came close enough to be caught.

On the day Ruby arrived in Birmingham, Jc. was at work, and her husband and granddaughter went to collect the dog.

When Jc. arrived home, she stood inside the front door and called Ruby.

Then, an amazing thing happened. Ruby came to her immediately, and lent against her legs. They bonded instantly.

And now it is rare to see Ruby more than a few inches away from Jc. Although, in the image above, she stands alone, this is very rare and is only because I got too close and frightened her.

Ruby’s dependency and her fear of ‘outsiders’, even if she has met them several times before, suggest that she has been very badly treated in her previous life.

It’s hugely comforting to know that she couldn’t have a better home than the one she has with her new family.

2 Responses to a very special lady