a hawk bell for Isis

Fortunately, he arrives home safely, none the worse for his adventure.

Next time we meet them, we hear a steady, melodious tinkling.

St. has bought them each a hawk bell.

Always slow where action is concerned, I procrastinate, and the months pass.

Then, of course, as I related last week, Isis wanders out of Kings Heath Park onto the pavement.

I order the bells and they arrive the following day.

Apparently, these bells were used by falconers in mediaeval times so that they could track their birds. Traditionally, they were made of copper or brass. Today the best ones are made of brass or bronze or nickel silver and have a clapper made of stainless steel. This clapper gives a beautiful clear tone which carries over a long distance. These bells have a lower, much clearer, tone than those usually sold for cats and dogs, and the sound of them carries over a much longer distance.

There is good range of sizes, so I imagine you could find one small enough for a little cat or large enough for a very big dog.

I order ‘large’ for Isis, the same as St. selected for her dogs. It’s not heavy, and Isis, who is very fussy about anything dangling on her, doesn’t seem in the least bit bothered about wearing it. 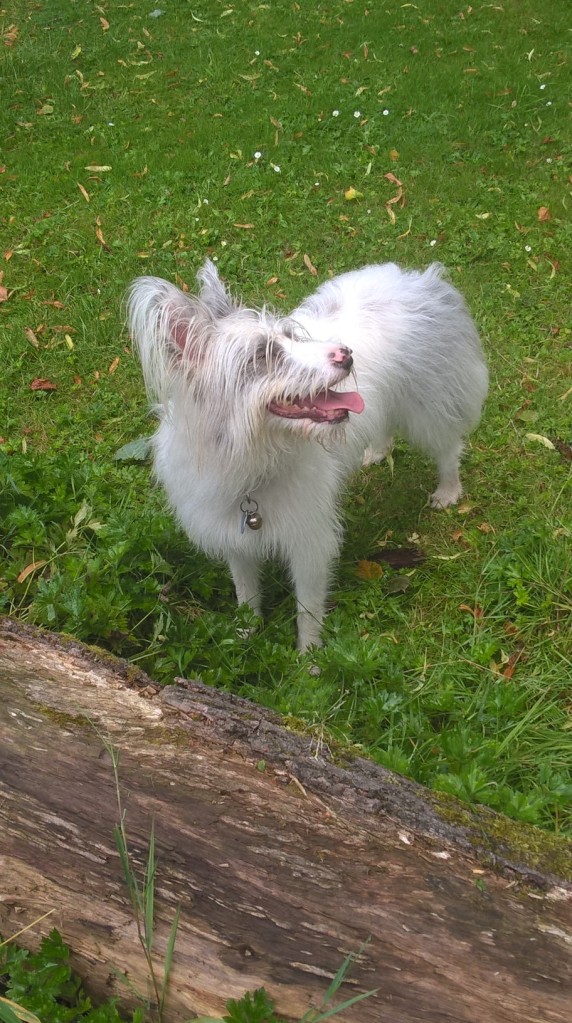 Today, before we set off for Highbury Park, I clip the bell to Hairy One’s collar.

We’ll see how it works.

When Isis is set free among her pine trees, Ji. suggests that he keeps an eye on her while I walk across to the little wood over a hundred yards away, stopping at intervals to check whether I can still hear the bell.

Brilliant! Even when I reach the wood, I can still hear the bell very clearly. And, of course, Hairy One’s penchant for leaping and dancing means that the bell rings almost constantly!

Now, thinks Ji., when we walk her to the field above the pond and sink to rest on the comfortable bench, she will no longer be able to sneak off, unnoticed, through the woods behind the bench and back to her pines.

We try her out. Sure enough, seconds after we have sunk to rest, off she trots.

Alerted by her bell, we watch her carefully. Unusually, she dances round a pair of trees which have a clear space around them so we will be able to see her if she moves away.

For about a quarter of an hour, all is well. Every few minutes, a bit of Isis, a leg, foot, floaty ear or tail, pops out from behind the trees. We can sit for a while longer  – it is, after all, tiring standing among the pines for forty minutes, Isis watching. We’ve done enough of that for today.

But then, minutes go past without a flash of white.

Strange. We know that she can’t have moved away from the trees without being seen, so what is she doing?

We begin to walk towards the trees. Not a sound.

We reach the trees. Still there is silence.

Has the hawk bell caught on a branch and been torn from her collar? Has a bit of broken off twig lodged itself against the clapper and stopped it moving?

We walk among the trees, Ji. in one direction, I the opposite way.

Suddenly, it occurs to me that there could be another reason for the silence. Isis could be standing still. Very unlikely, I know. But there have been several occasions on which Isis has made her way into undergrowth or dense shrubs, and, unable to see her way out, has panicked.

Imagine what it must be like to be blind and to feel prickly things all around you, stopping you from moving, trapping you. It can be confusing for sighted people to walk across a familiar room in the dark. It is easy to become disorientated and unable to find the door.

Usually, nowadays, Isis can find her way around familiar territory quite easily: she rarely walks into anything in the house or garden unless I have thoughtlessly left something in the wrong place. She can find tiny paths through the hedges in the park, and walks carefully around trees.

But when she feels trapped, she is terrified.

I begin looking into the the trees instead of around them, and soon find poor Isis, still as a little statue, standing close to the bowl of a tree, and caught up in undergrowth, hair-clutching pine branches and tall grass.

When she smells my hand and feels me touching her, her flufffy tail begins to wag fast. But she is obviously shaken and it takes a lot of soothing strokes and very gentle pats to persuade her to emerge.

I carefully pick all the narrow little pine twigs from her hair, but even then she is not herself. She lies on the grass for a while before she will walk on her lead.

Hopefully, a silent hawk bell will continue to be as informative as a ringing one.