another day in the life of Isis

Some mornings Human gets up at seven. That’s when she’s taking me to see the vet. I don’t like early starts. They make me nervous.

Sometimes she gets up at ten. That’s fine with me. I like a lie in. And there’s definitely no vet on those mornings.

Today I smell her having a shower at seven. This is very worrying. I tremble. Nothing happens though, so I curl up and go back to sleep.

Daisy tells me later that Human spread towels all over the bed and went back to sleep.

Daisy was very pleased. She climbed onto Human’s chest. Human was all lovely and warm so Daisy purred a lot. She explained that she did that because Human likes it and gets all soppy so she’ll probably have lots more showers and Daisy can help her dry off again.

‘You need to be sinny kul to get by in life’, she tells me, winking. ‘You’re never sinny kul. You’re only a dog.’

Oh dear. I can’t purr either.

Anyway, after a while that black shiny thing Human looks at and talks to all the time must have called her because she’s got it in her hand when I smell her in the kitchen and go to get my morning hugs and kisses.

She’s usually so slow in the mornings that I wonder if we’ll ever get to the front door.  But this morning my collar’s on, my harness is on and my lead’s on and we’re out the door before I’ve hardly had time to bark. (I like barking in the porch. It comes out very loud. I know because every morning Human jumps and prods me.)

We soon meet my friend R. with Gilbert and George greyhounds and I get two lovely liver treats.

Next Rufus shoves his curly head up my nose and I get gravy bones and a fuss from B. I get to sniff G.’s hand but he doesn’t give me anything so I don’t let him fuss me.

Does that mean I’m getting sinny kul?

I walk very nicely around the park because I remember that I’ll get to go to my favourite place later. I don’t need to lie down and say ‘no way’ or ‘shan’t’.

When I get to my favourite place I don’t want to sit under my big, safe tree because there are no shadows today.

Mostly I race up and down along the edge of the flowers and bushes. But when I feel like it I dash under a thick, scritchy bush and play, just for fun.

One time I do it and a nasty, sticky plant with tiny hard balls on it wraps itself round my face and my chest and my legs and it won’t let go.

I run out from under the bush very quickly and attack the nasty sticky plant. But I can’t get it off. I’m feeling a bit upset so Human comes over to help. I stand very still and she pulls it off.

After we get home I have a little rest then go into the front room to find Human.

I needn’t have bothered. She soon goes and fetches that box and brushes me. Ugh. I only do a very little growl after she’s brushed my face and throat and beard over and over and over again. All right, so there’s wet mud in it. There’s still no need to carry on like that. It pulls.

When I growl she stops. But I don’t get a treat. Because I’ve growled. So I lie very still and let her carry on.

Then she COMBS me and finds four mats behind my right ear. It’s her fault. She should feel behind my ears every day. She untangles two with her fingers and two she cuts off. I don’t like it but she doesn’t hurt me so I don’t say anything.

I do when she combs my rump though. I can’t help it. Not very loud though, or I won’t get a treat.

She’s taking an awful long time. I expect she’s saying stupid things like ‘I can’t believe all this hair is coming out’, and ‘I thought you’d lost all your winter coat’ and ‘Where’s it all come from?’ 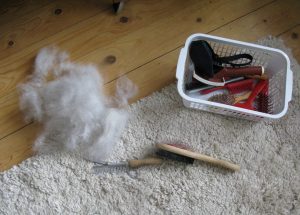 How would I know?

Anyway, thank dog, our new doorbell vibrates and L., our next door neighbour comes in for coffee and biscuits. I rush into the back room and sit in my bed waiting for my treat.

So it should be. I’ve earned it.

As soon as I’ve eaten it, I jump up onto the day bed and go to sleep.

I’m not going back in the front until I smell her putting the brush and comb box away.

2 Responses to another day in the life of Isis