A mystery. Where on earth is the head half of Hairy One’s snake? I know we had him a week ago. I posted this image. 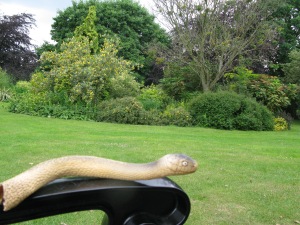 But this week he’s nowhere to be found. I know we’ve not taken him to the lane. Anyway, Isis always carries her snakes back to the house, usually to her bed.

Half-Snake is not in her bed.

Is he anywhere else in the house? I am apt to drop things on the floor all over the place.

It he were in the house, Isis would have picked him up and taken him back to her bed.

I search the boot.

He’s not in the boot.

Could Isis have dropped Half-Snake in the park? No, if she is playing with him, she doesn’t let go when I harness her: she always carries him to the car. If he’s in the park, the dropper must be me.

During the nine months that I was unable to take Isis to Kings Heath Park, quite a few new dogs appeared. Some weeks ago, I decide to take photos of them and post them on the blog.

The first few times I remember to take my camera to the park, no new dogs appear.

Then, just over a week ago, I meet a beautiful, very shy dog called Parsley. She’s only six months old. She’s a silken windhound. I’ve never heard of the breed before. She’s rather like a smaller, slimmer version of a saluki, but with softer hair. This time I’ve forgotten my camera again.

I’m very annoyed with myself.

On Friday I have my camera with me. As I sit on a bench watching Isis playing on the bank of the old bowling green, a young man comes along with a French bulldog pup called Ernie.

The young man joins me on the bench and we chat about our dogs. Ernie is only five months. He’s delightful, but I’m hoping he’ll not rush up to Isis and jump on her. Not only would that be the end of her game, it would be very difficult to persuade her to go back to the space, one of her favourite playgrounds, on future walks.

Ernie, of course, spots Hairy One and runs towards her. But her owner calls, ‘Ernie! No, Ernie! Ernie – come here!’

And the dear little pup comes back to his owner.

So impressed that I completely forget I have my camera with me until I’ve waved them off.

On Saturday I take my camera again and along comes Winnie, another new- comer. She’s a Yorkie/Jack Russell cross, just twelve months old and very beautiful.

I’ve met her once or twice before. I chat to her people, Mel and Doug, and make a fuss of little Winnie. She gives Isis a few sniffs but doesn’t bother her at all; nevertheless, Isis departs for the Colour Garden. I think she’s very sweet, but I’m told that she ‘has her moments’!

She races around so energetically that I think I’ll never get a good shot of her, but, suddenly, the dear little soul sits down right next to me. 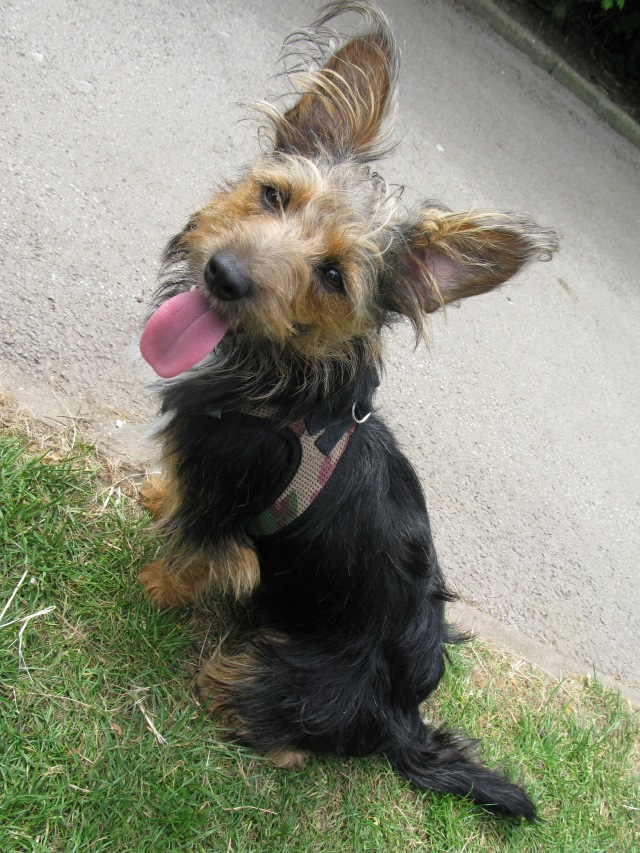 ‘She found a snake the other day’, they tell me.

They tell me that they thought it belonged to Isis as they’d met J, Wilda’s person and she’d recognised Half-Snake.

They explain apologetically that Winnie was so engaged with Half-Snake, she played with him until she’d removed his stuffing and reduced him to an ex-snake.

No problem. Isis has two and a half snakes left.

I think it’s quite funny.

I’ve not told Isis though.

2 Responses to Winnie meets a snake