a nest in the ivy

Posted on July 4, 2018 by patinkingsheath

I am downstairs before Isis can pick up my scent. I offer my hand to her spotty nose and up she jumps with joyful wags and stretches. I still relish these greetings which took so long to happen. By the time she first responded to morning strokes, I had long since decided that she would never be trusting enough to accept affection.

Checklist: summer gilet stuffed with dog bags, treats for Rufus, phone, kitchen roll (you never know) and Hairy One’s bottle of water from the fridge because she refuses to drink from the communal dog bowl unless R. persuades her.

Grab driving glasses and keys and we’re off.

Quite often we arrive at the car with the wrong set of keys, the one which lacks a car key. As one can imagine, Isis does not appreciate being frog marched back to the house for the right keys. She’s become a patient dog, though. She’s had no choice.

We set off at a brisk pace. If we leave by eight thirty-five, we miss most of the school traffic and get our favourite shady parking space in the park. This means that when we return Isis can jump straight into the car and have a cool drink.

It also means that she can play in her chosen spot for an hour before Bev, Gr. and Rufus arrive for a walk round the park and the pond. (It’s weeks since poor Nancy was able to join her brother in the park as she is recovering from a difficult cruciate ligament operation.)

In the morning, Isis dashes up and down and leaps around her bank tree. She barely pauses for breath.

Her evening outing is very different.

Around seven we leave the house again. By the back door this time. Isis shoots merrily down to the garden gate while I follow more slowly encumbered with a long lead, Half-a-Snake, cushion, phone and an apple.

Isis has established her own summer pattern. She pops into the lane to check out the scents while I fling Half-a-Snake as far away as I can. After a quick prance or two, she hunts him down, partners him for a dance and then takes him up towards the end of the lane. 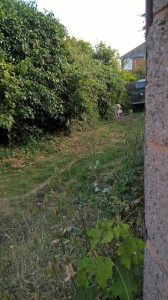 When she first began retreating to her den, I had no idea where she’d gone and thought that she’d escaped from the lane. But no, she appears to have become bored with escaping and no longer bothers to visit all the carefully blocked exits.

Her den is well hidden.

Even close up, you’d not know anyone was there.

Often, at going home time, I walk past her and on up the lane until a loud tinkle prompts me to retrace my footsteps.

The den is a few feet back from the track and I have to pull thick strands of ivy aside before I can locate her.

When I do, she is always lying down playing gently with her snake.

Sometimes, when she smells me approaching, she shuffles forward,

She’ll remain in her den until I go to fetch her, usually after an hour or an hour and a half.

Although I’m sure that she would be content to stay there until dark, she always comes out when I put my hand on her collar.

It’s a while since I’ve needed to use her lead. Nowadays I can just herd her towards the garden gate.

Tonight though, she surprises me. She walks ahead before I can stop her, finds the gateway and takes herself into her garden.

3 Responses to a nest in the ivy