Posted on July 1, 2018 by patinkingsheath

While I was out of action from August last year until May this year, several new dogs appeared in Kings Heath Park.

These photographs were taken by their human, Ju.

I’d often admired Walt as he accompanied Ju. on their park walks. 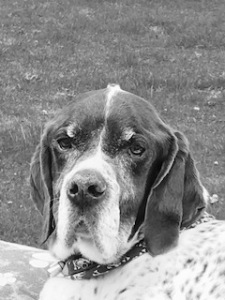 One imagines he was perfectly contented as the only dog. Life was calm. Life was quiet. He had no heavy responsibilities. He could snooze in peace whenever he wanted to.

But nothing lasts forever, Walt.

Something strange has come into my calm, well-ordered life.

What in dog’s name is it?

Hope it’s not visiting for long.

When she’s very little, she travels in the basket of Ju.’s scooter. You must admit, Walt, she was a very well-behaved passenger.

Now she’s more grown up she can walk around on her own. 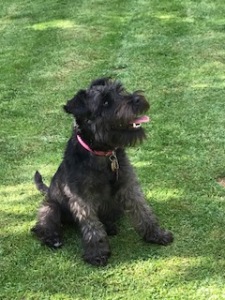 She doesn’t stray far from sensible big brother, though.

Come on, you must admit it Walt, you’re really very fond of her. And you know she can always rely on you to protect her.

I know it’s a huge responsibility, but she’s very sweet, isn’t she?

What did you just say Walt?

My Isis, of course, ignores both Walt and Flo. She’s not afraid of them, though, as they are both polite dogs and don’t bounce on her or sniff her in intimate zones.

4 Responses to meet Walt and Flo