Posted on August 25, 2019 by patinkingsheath

This is the tale of Isis Podengo and her friend Gentleman Blitz.

They have known each other for several years. Though they rarely interact, they are clearly perfectly comfortable around each other.

Rescue dog Blitz is a ball mad, dashing, rushing, jumping fellow. But he is gentle and polite around Isis, even his greeting sniffs are restrained and deferential.

It’s Wednesday. Friend Y. finds a nice blue ball on a string. Blitz will like this, she thinks. He does. He finds it delicious. Without pause for thought, he tears a a large slice out of it.

When Y distracts him with another ball, I rescue the abandoned prize and ask if Isis may have it. She loves dangly things and won’t mind at all that there’s a piece missing. She’s not proud.

I don’t give it to her there and then, but shove it into my pocket. As we know, Isis tends to become overwhelmed by a sense of responsibility for her toys, and if I give them to her in the park, she usually sets off back to the car with them.

Much better, I think, if she ‘happens’ to come across it in the park.

The next day I sneak it out of the car, intending to let her play for a while before she ‘finds’ the ball on a string.

I settle on my usual comfortable log and wait for her to trot off to her dance stage.

She doesn’t. Instead, she sniffs in an ever decreasing circle closer and closer to me. What on earth is she doing?

Slowly it dawns on me. She can smell the ball and she wants it.

I toss it a few yards away, and within a couple of minutes she finds it. She’s very chuffed indeed. 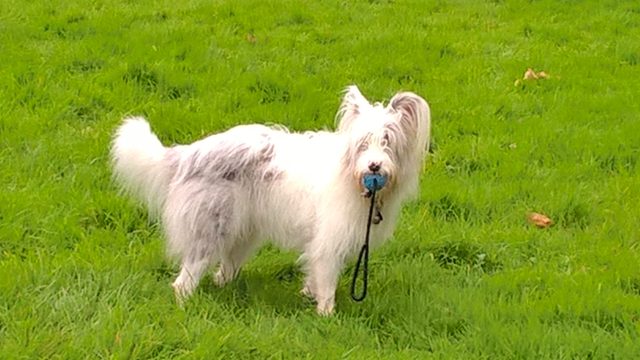 She doesn’t attempt to take it back to the car. She trots around with it, runs up and down with it, spins around with it, lets it go, dervish whirls away, and, after a few mad minutes, comes back to reclaim over it.

She’s having a lovely time. Plenty of exercise. Good.

Then up the slope comes Ollie, the park bully. He’s rather like a muzzled bumper car. He bears down on Blitz, their hackles rise, and then off they go rip-roaring over the meadow, between the trees, up and down the slope and through the long grass, in wild, wide loops.

When the game is finished, Ollie is walking away towards his human, when, suddenly, he catches sight of Isis who is innocently playing with her dangly ball.

“Whurraff!, shouts Ollie rudely, “Whurraff!”, and he pounds over to her.

Y. and I are not close enough to protect her, but as soon as he sees Ollie menacing her, Blitz rushes over, heads Ollie off and stands in front of her, chest stuck out, head lifted, stock still, glaring at the interloper.

Bully boy’s human captures him and leads him away. Blitz stays around for a few minutes, sniffing the grass, checks out Hairy One, marks the log and then wanders off amicably. He knows that she has his ball, but he’s too well-mannered to snatch it from her.

Amazingly, tail erect, she carries on playing as though nothing has happened.