Last November, I wrote about Simba and his new humans (post ‘three dogs and a tortoise’ November 10th 2019).

To recap: J and her partner had been on holiday at a beach resort in Turkey earlier in the year and had met pup Simba, agreed to adopt him and arranged to return to collect him in November.

K. tells me that it is common for bar, restaurant and hotel owners to obtain kittens and puppies at the beginning of the season because they attract tourists.

At the end of the season, when the bars close down, sadly, these poor ‘cute’ animals are turned out and left to fend for themselves.

A group of around half a dozen local volunteers does its best to keep an eye on the abandoned dogs, taking it in turns to feed them each day on the beach. For most of the time, though, the dogs are on their own and vulnerable. K told me that only a few weeks ago, one of the dogs was found bleeding. Unbelievably, both of his ears had been cut off with a knife.

When K. and her partner return to collect Simba, he greets them enthusiastically.

But he’s not alone. He has acquired a friend, a black labrador the volunteers have named ‘Mikey’. Clearly, this dog adores Simba. And clearly too, the feeling is mutual.

The couple are excited to be taking Simba home, but their excitement is dampened by regret that they can’t take Mikey too. They feel sad and guilty that the friends are to be separated.

The evening before they are to return to the UK, they sit outside having a drink with the volunteers. When Simba sits close them, Mikey squeezes himself between the couple.

“You’re going to miss your friend,” one of the volunteers tells Mikey

“Not for long,” interjects J’s partner, “He’s coming as well when we’ve sorted out the finance.”

The couple plan to get the money together to cover Mikey’s vaccinations, passport and air travel to the U.K., and agree that at the end of February J. will go back to Turkey to fetch him.

Since lockdown, of course, people no longer gather in groups in the park; additionally, Isis and I go for our walk early in the morning, so I’ve not seen Simba or his people for months.

Then, one day, two weeks ago, I get up late. Just as Isis and I are setting off from the car park in Highbury, there they are, out of the blue: J., Simba and a shiny black Mikey. 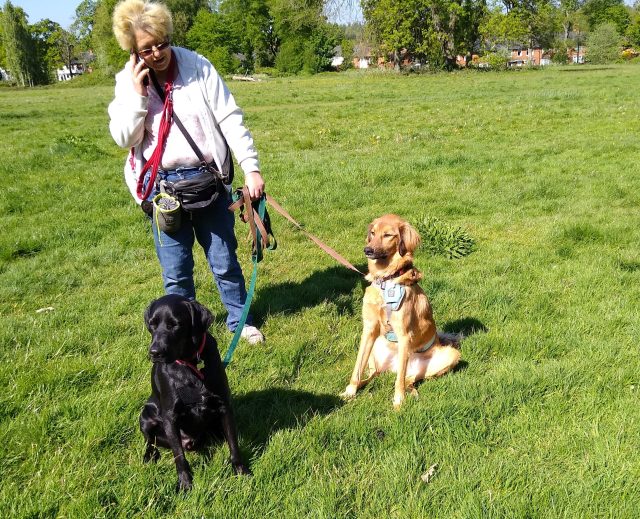 All three look happy and relaxed. I can’t rush up and greet them as I’d like to, of course, but I am able to get close enough to have a conversation.

I am eager to know about the reunion and how the dogs reacted to seeing each other again.

The meeting had been carefully planned. When K. and Mikey arrived, K.’s sister, who would be in the house with Simba, would come out into the garden and stay there with Mikey. K. would go into the house to greet Simba.

Then K. and Simba would go and meet Mikey.

When the dogs meet, a quick sniff is all it takes. Clearly, they are delighted to be together again.

In fact, everyone is happy.

Simba is not the best dog in the park when it comes to recall, but the humans are working on it. They know that Mikey will want to stay close to them, and think that he will be a  good example to his brother!

They are about to try them out off- lead in Highbury, when the lockdown is imposed. (Dog owners are asked to keep their dogs on the lead in public spaces in case they run up to other people and have to be retrieved, thus putting ‘safe distancing’ in jeopardy.)

So running in the park will have to wait.

In the meantime, Simba and Mikey are two very contented dogs.

8 Responses to Simba and Mikey