As we have seen, defecting from an overpopulated and churned up Highbury Park presents Isis with a number of very positive new experiences.

At first she finds each of the unfamiliar environments intimidating. She creeps and cowers and wants to go home. Gradually, though, she begins to enjoy herself. I had always been convinced that introducing her to unfamiliar areas, would traumatise her, that it would take her years to learn to negotiate new routes.

Except for Jasmine Fields, each time she’s been introduced to somewhere new, she’s been accompanied by Nancy and Rufus. There’s no doubt that their presence reassures her.

The other major player in this success story is what she can smell. This isn’t surprising since podengos are sight/scent hounds and Isis only has the scent faculty.

All dogs are interested in scents, of course, but for Isis, they are totally immersive. Once she gets wind of one, that’s it. It doesn’t matter where it comes from, she’ll follow her nose to its source, oblivious of anything else, including danger, unfortunately.

The scent which a fortnight ago leads to her being stranded in impenetrable brambles, turns out to belong to foxes. (When we revisit the spot, Bev finds the run.)

Last week, Isis  scrambles through a small hole in someone’s fence and shoots excitedly into a deep, closely planted border. A cat run this time, judging by its size.

Today she sniffs, apparently  innocently, at the bottom of a vast heap of prunings. I blink and she’s gone. This is ridiculous, I tell myself, scanning the surrounding woodland. Literally less than thirty seconds ago, she was at my feet, now there’s no sign of her.

But when I look up, there she is standing triumphantly at least eight feet above me, at the top of the heap.

Soon after, I’m waiting impatiently while she stands, sides heaving like a pair of bellows, with her muzzle shoved under a thick patch of ground ivy. Minutes go by. And more minutes. Probably, by now, beneath the ivy, a little mouse or shrew is having a small mammal heart attack. Eventually, mean Human removes her from the ivy and blocks her way back to it.

She doesn’t complain. She has other fish to fry. She’s not reached the climax of today’s scenting adventure yet. Not by any stretch of the imagination.

She’s only been coming here for a few weeks; even so, I realise today that she knows all the little twists and turns of each tiny track in this area, and I watch in awe as she leads on, oozing through the narrowest of twiggy interstices, ducking under low, low branches and wriggling over felled tree trunks.

She’s on a mission. She’s following her current most favourite scent of all. And now its source is tantalisingly close.

Yes – that’s it. Mind the slope. Spread out all your toes.

Snuffle. Yes! They’re definitely down there.

She does, in fact, fall into the hole. Unfortunately, she scrambles out at the speed of light and I’m not quick enough to snap her.

Very soon, she approaches the largest, and, if appearances are anything to go by, the smelliest entrance tunnel of them all. And, to my delight, I manage to snap her red handed.

To my dismay, the image appears to have disappeared into the ether. Like the fish that got away, it was a brilliant photo.

Serves me right for being so smug. You’ll just have to imagine a large white and grey rump protruding from the entrance of the sett below. 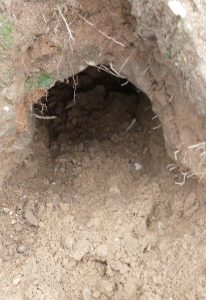 “One of these days, my dog,” I tell her, ” a huge hairy badger will come out of his bed and grab your little spotty nose.”

She doesn’t believe me.

2 Responses to badgering the wild life