Posted on August 8, 2021 by patinkingsheath

A few weeks ago,  it was extremely hot – hotter than it’s ever been since Isis came to England.

One day, we get to Highbury just before ten – well before the hottest part of the day.

We meet Y. and Blitzi. Apparently, Blitzi has been swimming in the big pond. Now he’s leaping up and down demanding that the ball be thrown for him, then shooting off at his usual speed. Y thinks it’s too hot for him, but he doesn’t. She’s about to take him home.

Each time I let Isis off, she looks dejected and tries to sneak back to the car park.

Eventually, having retrieved Hairy One for the fourth time, I decide that we’ll have to return home. But before we do, since I’ve not seen Y. for weeks, it’ll be good to have a quick catch up. We seat ourselves on a couple of fallen branches in the shade of a large tree.

Even Blitzi is tired now, and lies down to relax in the cool grass next to his human.

Isis isn’t keen to lie down. Reluctantly, she sits.

But she’s restless, and soon she’s showing signs of distress. We drive home with all the windows and the sun roof open, and hastily retreat indoors.

Isis jumps onto the day bed. Now she’s breathing very quickly and her flanks are heaving. I fan her with my hands. This seems to bring her some relief, but she can’t settle. She sits up, then lies in a Trafalgar Square Lions pose, then she’s up again, down again, up again.

I soak a tea towel in cool water, wring it out and spread it over her. (I don’t tell her it has a large ginger cat on it.)

Within minutes, she lies on her side, relaxes, stretches out her legs and falls asleep.

She sleeps well past her teatime. 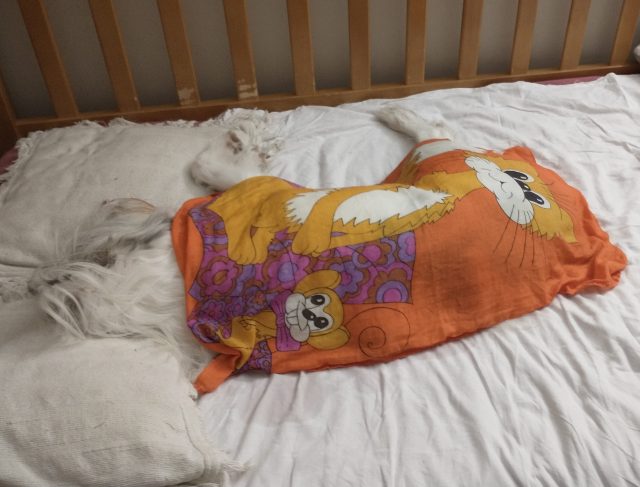 I stay downstairs with her that night, and monitor her body heat.

I’m shocked. I had been warned before I adopted her that Portuguese and Spanish dogs, used to a warm climate, need to be protected from the cold when they are rehomed in cooler climates, but it hadn’t occurred to me that a Portuguese dog wouldn’t cope with the heat.

But, for a brief period, it is record breakingly hot here. For three or four days, we stay inside, and I cool her with the wet tea towel when necessary.

After this, until the temperature drops, we only venture out very early in the morning.

Isis doesn’t have a cool mat, as she’s not had a problem with heat before, even on the midsummer beaches in Wales. Several people I know have bought cool beds for their dogs, and the dogs have happily used them.

Not every dog though.

Bev orders one for Rufus, whose coat is very thick and curly. He often becomes uncomfortable in the heat. He refuses to lie on it.

Bev moves it all over the garden, placing it in numerous temptingly cool, shady places, but the ungrateful Rufus just looks pained and moves somewhere else.

By the time she’s finished trying to persuade him to use it, I think she’s ready to stretch out on it herself.

I’m pretty sure Isis won’t accept a cool mat, but am so concerned about her becoming overheated, I order one for her anyway.

When the mat arrives, Isis is snoozing in the front room, so I shake it out and spread it on the day bed to let it settle. Then I join her – not for a snooze, but to drink my coffee.

Later on,  I go upstairs and she makes her way to the back room.

I give her time to settle, then creep surreptitiously to the other end of the room to observe what’s happening.

This feels safer. If it attacks I’ll just bite it.

She continues to avoid her lovely, new cool mat.

I remove the mat, but a few days later, it’s quite hot again; also I’m replacing some floorboards in the front room, so have rolled up her rug and left her nowhere to lie.

I spread her new mat out in front of my chair where she likes to recline while I have my first coffee of the day. 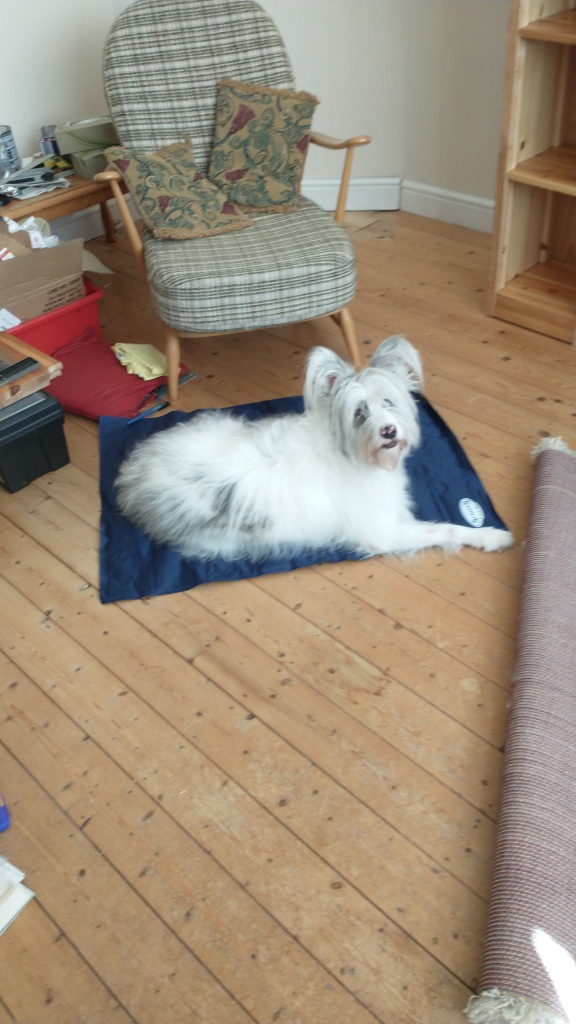 It’s been much cooler since then, in fact, some people confess to having switched their central heating back on.

That’s Britain for you.

We’ll see what happens if we have any more heatwaves.